They knew long before we did.

Ahead of getting engaged to Prince Harry, Meghan Markle left her role as Rachel Zane in the hit US TV series Suits. A role which she first undertook in 2011, Meghan starred in the series for eight seasons before calling it a day.

And during this time, the Duchess of Sussex became extremely close to her co-stars, many of which even attended the royal wedding in May of this year. So, when she started dating a prince, it wasn't long before her colleagues were aware of the news.

Now revealing how they found out about her developing relationship, Meghan's on-screen dad, Wendell Pierce revealed all, speaking to Extra, he said:

"I actually didn’t believe it was real, then all of a sudden I turn around and there is this guy from MI-5 on set every day."

"The one thing that was clear, she was extremely happy… She had a glow, I knew she was in love... with the whirlwind of publicity and the world of being a royal now, the one thing that’s constant is the fact that I know she loves him." 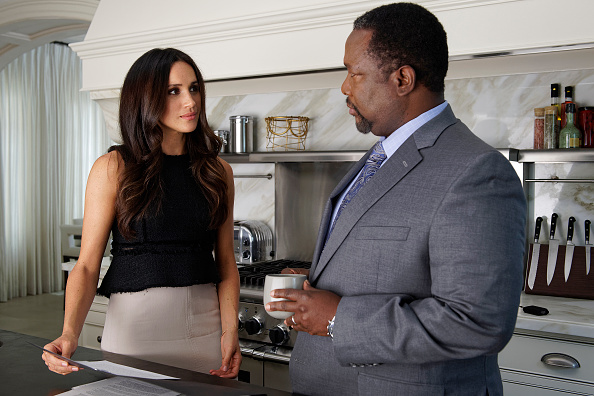 Meghan's exit from the show was also supposedly a "long time coming" with all the crew aware that her reason to leave was to begin her new royal role.

“I knew from a year ago that this relationship was burgeoning.”

"I sort of had a decision to make because I didn't want to intrude and ask her, ‘Hey, what's going on? What are you going to do?' So, collectively the writers, we decided to take a gamble that these two people are in love and it's going to work out."

And that it did. in late 2017 Meghan wrapped on filming as Rachel Zane and on November 27, 2017, her engagement to Prince Harry was announced to the world.


popular
Gardaí concerned for welfare of missing 14-year-old Dublin girl
Woman's suitcase and bank cards stolen as she gives birth in Dublin hospital
5 family members, including parents, sentenced over sexual abuse of children
Mass murderer Anders Behring Breivik applies for parole for 2011 killings
Calls for child benefits to be taxed to help fund early years services
Daughter of missing Dublin woman issues heartbreaking plea
Best friends find out they're pregnant on the same day and give birth an hour apart
You may also like
11 hours ago
A man has been charged with the murder of father, Michael Tormey
19 hours ago
Mass murderer Anders Behring Breivik applies for parole for 2011 killings
20 hours ago
Newborn found dead in duffel bag outside US fire station despite safe haven law
21 hours ago
Penneys to open brand new mega-store in Dundrum Town Centre next year
22 hours ago
Concerts and pub restrictions are expected to be lifted this week
1 day ago
Here are the 3 most common Omicron symptoms parents notice in kids
Next Page