The mum said she feels "awful" after the incident.

One mum experienced quite the Christmas blunder when her son spotted her with his Santa gifts.

She is now feeling worse than ever and is worried he no longer believes in Santa.

"My 8 year old caught me putting out Santa presents on our puppy CCTV cam," she revealed.

The mum admitted they never thought to cover it up ahead of Christmas Eve.

"I didn’t even think he’d be able to check back on the footage," she confessed.

Her 8-year-old son asked her why she was putting his presents under the tree, but she's not sure her excuse convinced him.

"I said that Santa is really good at disguises and he doesn’t like getting caught so he made himself look like me."

The mum's excuse seems pretty clever to us, but she said she is worried about her son. 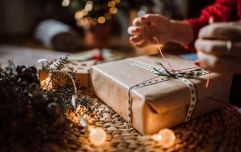 END_OF_DOCUMENT_TOKEN_TO_BE_REPLACED

"He thought for a minute and seemed to buy into it. He said he didn’t see my actual face and saw a beard at one stage."

"I feel awful though," she admitted.

Any parent would understandably feel awful after an incident like this. Nobody wants to spoil the magic of Christmas, but as all parents know, these things do happen.

"He hasn’t spoken about it since but I can see the doubt in my 10-year-olds eye," she said.

What would you do if you were in this mum's situation?

Do you think she's done enough or is there something else she could do to help her son believe again?

popular
Dunnes Stores launches stunning collection of Communion dresses
Siblings kidnapped in March 2022 have been found alive
Police do not believe Nicola Bulley was a victim of a crime
Emma Pattison: Tributes paid following death of head teacher and her family
Stacey Solomon hints at baby girl's name as due date nears
Time to book those holidays! Here's every Bank Holiday in Ireland in 2023
Former YouTube star Jim Chapman and wife Sarah expecting second child
You may also like
1 month ago
Leaving your Christmas lights up is actually good for your mental health
1 month ago
Jonnie Irwin hasn't told his kids this could be their last Christmas together
1 month ago
Opinion: Christmas jumpers are fuelling a global eco disaster
1 month ago
This simple hack will make your fake tan last WAY longer over Christmas
1 month ago
The 10 biggest causes of family arguments on Christmas Day
1 month ago
Teacher pens emotional note about what kids actually need for Christmas
Next Page