It was recently revealed how much the stars of the Teen Mom series are paid per episode and let's just say it's a lot!

Apparently the stars of Teen Mom OG and Teen Mom 2 are making some serious cash and we can't see them turning down a renewal contract anytime soon.

Three lovely ladies 🌹 Meet the new moms @cheynotshy and @bsmp2 on next Monday’s #TeenMomOG special at 9/8c on @MTV.

Most young people don't that earn that much in a year.

The mums are not the only ones bringing home some serious bacon though.

In case you missed it: Here's what went down on Part 1 of the #TeenMom2 Reunion 🎥 It continues this Monday at 9/8c on @MTV! 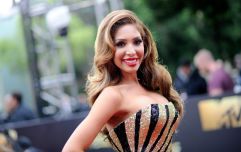 END_OF_DOCUMENT_TOKEN_TO_BE_REPLACED

According to Radar Online;

"It was all thanks to Amber. She made sure Gary made as much as she did when they were together."

The cast also gets an additional $1,000 per reunion.

Some parents have complained that the show is encouraging young girls to become pregnant as teenagers and giving the impression that being a teen mom is a career choice.

Regardless of whether or not the cast give the wrong impression of what it's really like to be a teen parent I don't think we'll be seeing an end to the series anytime soon. Not when they're getting those paychecks.


popular
Aldi to limit number of Christmas toys customers can purchase
Level 5: What is a social bubble and who can have one?
4 seriously clever parenting tips we should be taking from Danish parents
Domino's is giving away free pizza to Ireland's frontline care workers
Aldi will be releasing even more 'knock out' toys in the run up to Christmas
Bottle-fed babies ingesting 'millions' of microplastics each day, new Irish study finds
Sostrene Grene's Christmas collection arrives in stores this week – and we'll race you there
You may also like
8 months ago
'We're so excited!': Teen Mom's Kailyn Lowry reveals the gender of her fourth child
1 year ago
Catelynn Baltierra from MTV's Teen Mom is celebrating a pregnancy milestone today
2 years ago
Teen mum takes her two year old daughter to prom with her
2 years ago
Teen Mom OG's Catelynn has sadly suffered from a miscarriage
2 years ago
Teen Mom's Catelynn Lowell reveals she's pregnant with her third child
2 years ago
Teen Mom's Amber Portwood confirms she is pregnant with baby number two
Next Page