Cleo is now back home with her family.

WA police have released footage of the moment Cleo Smith was rescued.

In the clip, young Cleo is being held in the arms of an officer.

The team of investigators broke into a locked house in Carnarvon at 1 am on November 3rd. 4 officers entered the house and discovered Cleo in one of the rooms.

They said she was "very trusting and energetic" when they rescued her.

Cleo and her family's home is reportedly just a 7-minute drive from the house she was being held in.

Cleo has been discharged from the hospital after undergoing medical tests.

It is believed she is "physically" well and is now back at home with her parents.

Speaking of the reunion with her parents, Detective Sergeant Cameron Blaine said the young girl called out "mum" when reunited with her family.

There were a lot of “big hugs, kisses, and lots of tears".

The moment Cleo was rescued 👏 pic.twitter.com/arusYi9kCa 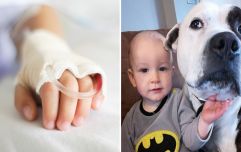 END_OF_DOCUMENT_TOKEN_TO_BE_REPLACED

Detective Blaine said she became "a little Energizer bunny” when she was with her family. He added that Cleo is a "very sweet, energetic girl”.

“How she has that much energy. I wish I did. We all wanted to take turns holding her," he added.

Cleo's family was stunned to hear investigators had found the 4-year-old.

Blaine shared, "You can imagine, absolute surprise and they were ecstatic. Things developed so quickly. We didn’t really have time to prepare them."

A 36-year-old man remains in police custody. Officers revealed he was not at the house when Cleo was rescued.

Cleo had been missing for 18 days. Her mum woke up on the morning of October 16th to discover her daughter was missing from their family tent at the Blowholes campsite in Carnarvon.

Police say this was an "opportunistic" crime and the suspect has no links to Cleo or her family.


popular
Kourtney Kardashian and Travis Barker officially tie the knot
I feel like my teenage son is blackmailing me for money
Bridgerton has replaced one of its original cast members
There's a reason why we didn't see this Bridgerton couple get married on screen
You will now have to pay to return your clothes to Zara
Mrs Brown’s Boys star Fiona O’Carroll says being a single mum is a "struggle"
"It can happen": Mum issues stark warning to parents after her dog attacks toddler
You may also like
3 days ago
Mum's horror after stranger snatches her 4-year-old son in broad daylight
4 days ago
"She is vulnerable": Police fear missing schoolgirl (15) was abducted
5 days ago
Search underway after 11-year-old twin girls go missing
6 days ago
What is chroming? Mum issues warning after daughter dies from dangerous trend
6 days ago
Family hit with backlash after making 6-year-old run full marathon
1 week ago
Australian girl found unconscious after she was left on bus in 29°C heat
Next Page