"To make that decision to receive help is not a sign of weakness. In today's world, more than ever, it is a sign of strength."

The first trailer for Prince Harry's documentary - The Me You Can't See - was released yesterday, and it looks extremely powerful.

The documentary, which he worked on with Oprah Winfrey, examines mental health from a number of perspectives, and features several big names, including Lady Gaga, Glenn Close and NBA player DeMar DeRozan.

The Me You Can't See also includes an interview with Fawzi, a Syrian refugee.

The two and half minute trailer was released on Archewell, Prince Harry and Meghan Markle's website. It includes heart-breaking footage of a young Harry attending the funeral of his mother, Diana, Princess of Wales.

In the trailer's voice-over, Harry talks about the importance of seeking and accepting help in relation to mental health.

He says: "To make that decision to receive help is not a sign of weakness. In today's world, more than ever, it is a sign of strength." 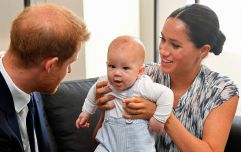 END_OF_DOCUMENT_TOKEN_TO_BE_REPLACED

This isn't the first time Harry has spoken publicly about mental health.

During an appearance on The Armchair Expert Podcast, Harry said that when he started therapy, it was like "the bubble was burst".

He also spoke about how he wishes to avoid passing any "pain or suffering" onto his children.

He told the podcast hosts: "I don't think we should be pointing the finger or blaming anybody but certainly when it comes to parenting, if I've experienced some form of pain or suffering because of the pain or suffering that perhaps my father or my parents suffered. I'm going to make sure I break that cycle so that I don't pass it on.

"We as parents should be doing the most we can to try and say 'you know what, that happened to me, I'm going to make sure that doesn't happen to you.'"

The Me You Can't See arrives on AppleTV+ on 21 May.


popular
Britney's not allowed have babies or paint her kitchen — Here's everything you need to know about her conservatorship
Same-sex couple give birth just 13 days apart: "It's like having twins, but from different bodies"
9-month-old boy drowns in Father's Day tragedy
Irish couple whose healthy pregnancy was terminated after incorrect FFA diagnosis settle in court
Aldi's new garden collection includes massive waterpark and 14ft rattan pool
HSE calls for cancellation of First Communions and Confirmations due to Delta Variant strain
Emotional scenes as This Morning competition winner says she has months to live
You may also like
1 week ago
Meghan Markle wrote a kid's book and it's getting absolutely trashed by critics
2 weeks ago
Why we probably won't see a first picture of Meghan and Harry's baby girl for a while
1 month ago
Prince Harry compares growing up with royal family to "living in a zoo"
1 month ago
Meghan Markle wears Woman Power jewellery in honour of female empowerment
1 month ago
Meghan Markle is releasing a children's book inspired by Harry and Archie
3 months ago
Piers Morgan in "£10m bidding war" after Good Morning Britain exit
Next Page