Research suggests this physical trait makes for a better relationship

Yes, we know that for a relationship to (happily) go the distance, that communication, respect, and love are all key factors in a strong foundation.

Yet, a study into heterosexual couples has uncovered a positive correlation between a husband’s height and a wife’s happiness.

In fact, the study claims that the greater the height difference in a couple, the happier they are… although the effect fades over time.

The study, which gathered long-term data from 7,850 married women, was conducted by researcher Kitae Sohn from Konkuk University in Seoul, South Korea.

“Although it has been known that women prefer tall men in mating for evolutionary reasons, no study has investigated whether a taller husband makes his wife happier.

“One [reason for its conclusion] is the intrinsic value of height; that is, women simply like tall men, while unable to say why. This is similar to people favouring fatty, salty, and sugary foods without knowing exactly why: such foods are essential to survival but were scarce as humans evolved — hence craving such foods increased reproductive fitness in the past.”

However, the height factor fell short by the 18th year of a couple's marriage. 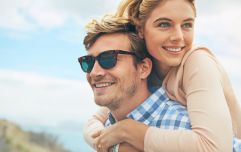 Try and do this one thing with your partner every day

END_OF_DOCUMENT_TOKEN_TO_BE_REPLACED

The results come just a week after a study pointed to a man’s height as having a significant effect on the number of sexual partners he’s likely to have – with shorter men tending to have between one and three fewer sexual partners than taller men.

However, take some comfort from the fact that David Frederick, Ph.D. revealed to Men’s Health, that the most important quality people rated in a partner was:

“Men and women both report that their top quality in a long-term partner is someone who is genuinely kind and understanding.”


popular
The most popular baby names in Ireland have been released in Statistical Yearbook 2021
Have kids, they said... 11 photos that'll make you feel better about your day
3 abandoned kids and skeletal remains of 9-year-old brother found in Texas
Forensic officers search home of missing Cleo Smith for a third time
Further details emerge on abandoned Texas kids found with skeletal remains
I had a baby using donor egg treatment, here are my 5 most important pieces of advice
These 5 foods could increase your chances of having twins
You may also like
5 months ago
The one thing couples who have better sex have in common...
2 years ago
10 weird things no-one ever ever says about pregnant sex
2 years ago
10 things every impregnator needs to know right now
2 years ago
10 rules of parental sex that new parents absolutely need to know about
2 years ago
Ho Ho Oh NO! These are the 10 most common things couples fight over at Christmas
3 years ago
Men with pretty wives are happier in their marriages, a new study finds
Next Page