It has been three years since their fairytale wedding at Ashford Castle, Co. Mayo, and now Rory McIlroy and his wife, Erica Stoll, are just days away from welcoming their first baby into the world.

According to Golf Channel  – and the world media at large today – Stoll is reportedly nine months pregnant — which may explain why the 31-year-old golfer recently admitted he 'doesn’t plan on playing outside the USA anytime soon.'

Golf Channel, the TV network who broke the news, said that while McIlroy is currently competing in the BMW Championship in Chicago,  Erica has been resting at their home as the couple prepares for the arrival of a baby girl.

No comment has yet been made as to what will happen to the dad-to-be's sporting calendar over the coming months, but McIlroy himself apparently told reporters last month that he wouldn't be competing in the Dubai Duty-Free Irish Open, admitting he was 'unlikely to play outside of America any time soon.'

Which, you know, makes sense when you realise his wife is days away from delivering a baby. 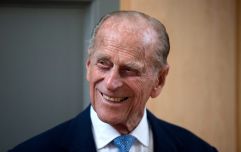 END_OF_DOCUMENT_TOKEN_TO_BE_REPLACED

After the news broke of his wife's pregnancy, the golfer told reporters in Chicago yesterday he was basically just waiting for the call that the birth was underway.

“I’m just waiting for a phone call,” McIlroy said at the conclusion of his round.

“I was waiting for a phone call last week and it didn’t come, and then (McIlroy’s caddy) Harry (Diamond) has been keeping his phone in his pocket just to make sure, but nothing as of yet.”


popular
10 seriously unique Irish baby names that are not too popular (yet)
Rare "Sahara dust" weather event expected to hit Ireland this week
RTÉ 2 wins rights to Harry and Meghan's Oprah interview
These 5 Foods Could Increase Your Chances of Having Twins
Des Bishop and girlfriend Hannah Berner announce engagement
Top Tips On How To Recover And Refuel Your Body After Miscarriage
4 ways to fix hard slime with ingredients you probably already have at home
You may also like
1 day ago
Simon Harris warns Limerick students could be expelled for attending street party
1 day ago
PICS: Three arrested following street party in Limerick
2 days ago
Dolphin seen in Galway Bay probably not Fungie
3 days ago
Ryanair in breach of advertising rules over "misleading" and "offensive" Vax and Go ad
3 days ago
Vicky Phelan "hopeful" as she receives first results from new treatment
3 days ago
Hilaria and Alec Baldwin have welcomed baby No. 6 — five months after baby No. 5
Next Page