Baby joy for the Hollywood couple.

Huge congratulations are in order for Black Widow star Scarlett Johansson and Colin Jost, who are expecting their first child together.

According to Page Six, the couple is set to welcome their tiny tot into the world very soon.

"Scarlett is actually due soon, I know she and Colin are thrilled," the publication shared.

“She hasn’t been doing many interviews or events to promote ‘Black Widow’ which is surprising since it is a huge Marvel/Disney release and she is both the star and an executive producer,” they added. 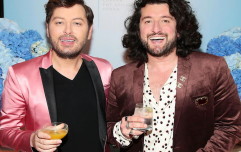 Brian Dowling and Arthur Gourounlian expecting their first child together

END_OF_DOCUMENT_TOKEN_TO_BE_REPLACED

The actress didn't attend the world premiere of Black Widow in London and has been carrying out press events via Zoom.

Disney has also hosted multiple events following the release of the movie, but Johansson is keeping a low profile.

The Marriage Story actress married the SNL star in a private ceremony last October. The couple met in 2006 but didn't become romantically involved until 2017.

This is Jost's first child, but Johansson is already a mum to 6-year-old daughter Rose, who she shares with ex-husband Romain Dauriac.

popular
Bride asks for divorce day after wedding following groom's disrespectful cake stunt
Police believe they know what happened to missing dog walker Nicola Bulley
Students given £500 after uni was unable to give them their degree certificates at graduation
Entrepreneur schoolboy has made £1,000 from selling sweets
Dad admits he hates his daughter's name so much it makes him uncomfortable
Parents believe CoComelon causes tantrums and speech delays in toddlers
Going on solo holidays is good for mothers, science says
You may also like
11 months ago
Alexandra Burke reveals she is expecting her first child with Irish footballer
1 year ago
Study reveals how long women should wait between pregnancies
1 year ago
Surprise! Gavin and Stacey star Joanna Page is expecting her fourth child
1 year ago
Baby joy for Ashley Graham as she announces her second pregnancy
1 year ago
"Nothing was out of the ordinary" - UK mum who had surprise baby didn't even knew she was pregnant
1 year ago
Woman born without a uterus gives birth after groundbreaking uterus transplant surgery
Next Page