The shooter used his father's gun in the horrifying attack.

3 people have died and multiple others were injured in a shooting at Oxford High School in Michigan.

A teacher was injured in the shooting but they have been discharged from the hospital.

There are currently 7 children, aged between 14 and 17, being treated in hospital with gunshot wounds.

One of the victims is a 14-year-old girl who is on a ventilator after surgery.

The teenager was a sophomore at the school.

He was in police custody within 5 minutes of the 911 call, reports state.

Parents walk away w/their kids from a Meijer's parking lot in Oxford where many gathered following an active shooter situation at Oxford High School in Oxford on November 30, 2021.
Police took a suspected shooter into custody. 3 dead, 6 injured.
📸‘s by @ericseals of @freep pic.twitter.com/x1pSOUbKk2 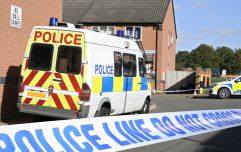 END_OF_DOCUMENT_TOKEN_TO_BE_REPLACED

It is believed his father purchased the gun that was used in the attack.

Oakland County Sheriff Michael Bouchard said they have yet to uncover a motive behind the shooting.

He stated: "It’s a very tragic situation with ‘a lot of upset parents."

"You never want to prepare for something like this, but you have to, and the school district has done a wonderful job preparing."

Michigan Governor Gretchen Whitmer said, "I think this is every parent's worst nightmare."

She stressed that school shootings in America are a "uniquely American problem that we need to address."

"My heart goes out to the families. This is an unimaginable tragedy.

"I hope we can all rise to the occasion and wrap our arms around the families, the affected children and school personnel, and this community," Whitmer added.


popular
State fails in appeal to jail man for assaulting his four-month-old daughter
Parents of UK teen kidnapped & left paralysed by boyfriend furious at "lenient" sentence
Expert says Cocomelon acts "as a drug" to kids' brains
Jason Momoa says he's "so proud" of stepdaughter Zoë Kravitz after Lisa Bonet split
Crystal Swing's Dervla calls for more supports for children with autism
Whether you’ve got a baby on the way or have an army of your own, the Lidl Big Baby Event is here to help
Here’s how your kids can learn about the importance of Irish nature in a fun and interactive way

You may also like
3 days ago
Star Hobson's killer trying to appeal her sentence
3 days ago
Met police apologise for "sexist, derogatory" language used in strip-search
4 days ago
Outrage after school refuses to let pupils wear coats
1 week ago
Two UK teens arrested after Brit gunman's 10-hour standoff at Texas synagogue
2 weeks ago
Nursery failed to call ambulance after bucket of bleach fell on baby
2 weeks ago
Baby in stable condition after he was found in a bin bag
Next Page