Sophie Ellis-Bextor Is Sick Of Gender Stereotyping Our Kids, Are YOU?

Singer and mum-of-three posted an adorable snap of her son, Ray to Instagram this week and used the platform to bemoan the "old-fashioned" gender stereotyping that still goes on in the kid's department of clothing stores.

The pic shows Ray sporting cute pjs in his favourite colour, pink. She explained that she'd had to buy him his pyjamas in the girl's department so that Ray could have his fave colour. 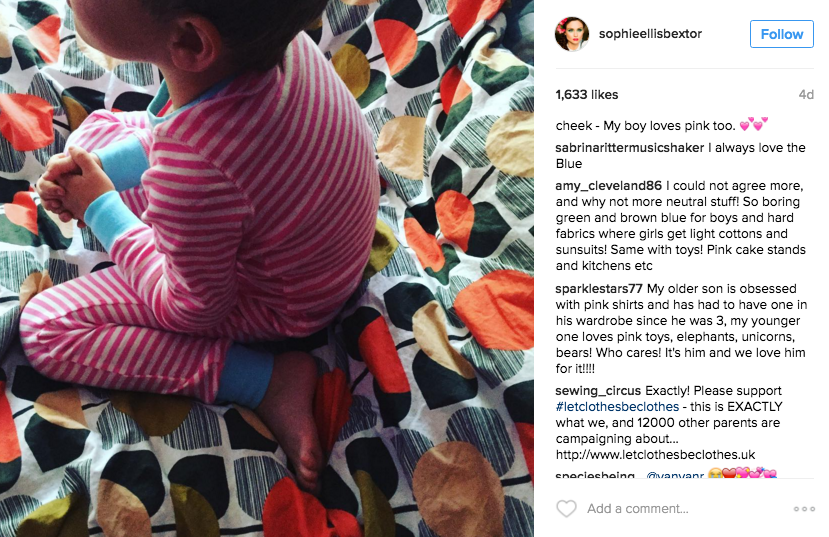 The down-to-earth mama, who has more than 50k followers on Instagram, bemoaned the unnecessary distinction shops make between girls clothes and boys clothes.

“Why do shops segregate clothing/toys into things for boys and things for girls? I bought these from the girl’s section, but it all feels a bit stupid and old fashioned that clothes aren’t just grouped together by type rather than gender. Let people be people. We can make our own decisions.”

The singer, who's new album is out next month, received huge support from commenters on the post:

"Agreed! I'm forever buying my daughter stuff from the "boys" section because she loves dinosaurs, Star Wars, Doctor Who, etc. At 10 it would appear she love sparkles and Disney princesses according to clothing shops. Ray suits his pjs xx," said Upnorthlol.

"Agree totally! If I buy smth pink for my son, some people start laughing "hey he's not a girl, isn't he?" Some people are really slaves for stereotypes... " added Magentaeden.

The debate is something that parents clearly feel strongly about. The Let Clothes Be Clothes campaign started by Francesca Cambridge Mallen and Ruth Lopardo in 2014 works to challenge gender stereotypes in children’s clothing and is one which many felt was long overdue, while last year US store Target announced that they would be phasing out gender-based segregation in their toy departments. 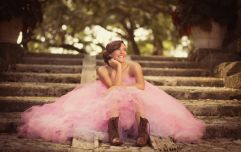 This Kilkenny disco is telling teenage girls how to dress

END_OF_DOCUMENT_TOKEN_TO_BE_REPLACED

It's great to see kids disregarding the ridiculous gender stereotypes that we adults, sometimes totally unconsciously, place on them.

Gender stereotyping is something I often wonder about as my two-year-old son is absolutely obsessed with cars and trucks and muck and I can't remember at any time particularly pushing these things on him. It often seems like he just came out with this preprogrammed love of anything on wheels.

I mostly dress him in pink and white and green and blue (though he's getting more and more into his 'look' lately) because I think they're the nicest colours on him. Perhaps because of this (and his long curls and his amber beads and the lipstick he wanted to wear to playschool yesterday) he is often described as 'beautiful' and a 'pretty girl'. I privately see as a bit of a mini win, proof that I'm not shoehorning him into a 'boy' identity and just letting him be who he wants to be.

Conversely, however, I also call him 'my mini man' and I've read criticism of using the term "man" for a little boy which makes me question my use of it. I think it's a pretty innocent affectionate moniker for a baby. However, when I put the shoe on the other foot, I don't like calling my friend's daughter "little lady," it sounds slightly patronising or something...

Hopefully, with campaigns like Let Clothes Be Clothes the new generation may have this whole gender identity sussed far better than we currently do.

What do you think? Are we just offended by everything these days? Or do YOU struggle with the (often unintentional) gendered way we parent our kids? Let us know in the comments...


popular
My sister wants to marry our dead sister's husband- how could she do this?
12 Elf on the Shelf ideas that your child is bound to love
Cleo Smith's alleged abductor wins adjournment, delaying his case
Parents warn new children's app is "basically Tinder for kids"
Stuck for space? Here are the PERFECT Christmas trees for you
Grandmother sparks debate after saying she won't babysit grandson without being paid
20 Unisex Irish Baby Names That Are Absolutely Magical
You may also like
2 years ago
Mum vents about people questioning her daughter's firefighter costume
4 years ago
Girls' Self-Esteem Is Lower Than Boys By The Age Of Just Six
5 years ago
Mum Fights Gender Stereotypes With Powerful Instagram Campaign
5 years ago
There’s A Huge Problem With Disney Princesses (That You Never Noticed Before)
5 years ago
This mum has two healthy sons but spent $100,000 to ensure baby #3 was a girl
6 years ago
"Dads have harder jobs than mums," thinks this 7-year-old...
Next Page