A women's only club night is coming to Dublin - why do we need these kinds of spaces?

"Nightclubs aren’t a safe place for women and haven’t been for a long time."

A women's only club night is coming to Dublin this summer - and it looks like a lot of fun.

The company behind it all, Lick Events, say that its nights are for women, non-binary and trans people only, and a strict "no men allowed" policy is enforced.

It has quickly become one of the biggest club nights in the UK, averaging a whopping 2,000 attendees per night.

Teddy Edwardes, founder of Lick Events, says she decided to set up the night after becoming tired of repeatedly experiencing harassment from men in nightclubs.

"I decided to start a night for women almost six years ago in London, mainly because every nightclub I went to I’d have a bad experience with men grabbing me or being inappropriate and I got sick of it," she tells Her.ie.

Teddy, who is a lesbian, also wanted more spaces for women in the LGBTQ community - bars and clubs specifically for lesbians in Dublin are completely lacking, a problem in itself.

Videos straight from the dance floor of the nights across the UK have blown up on TikTok and many people have praised Teddy for setting up a much-needed "safe space" for women.

One video, titled 'A little look inside the UK's biggest club night where no men are allowed' has over 1.1 million views, 253,000 likes, and thousands of comments from women who absolutely love the concept. 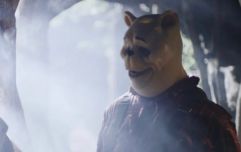 A Winnie the Pooh horror movie is on its way, and no we're not joking

END_OF_DOCUMENT_TOKEN_TO_BE_REPLACED

With over 40 cases of spiking reported to the Gardaí this year alone, it's no surprise women are starting to feel uncomfortable and afraid going on nights out.

"We need spaces like this because nightclubs aren’t a safe place for women and haven’t been for a long time," Teddy says.

"We don’t feel comfortable to dress how we want and struggle to let loose knowing a man might grab your bum or harass you all night."

Teddy points out that some women will to gay nightclubs to feel a bit safer, but in London, they don’t always let women in.

Comments on the event's TikTok page (mostly from men) say things like: "So who pays for the drinks then?" and "Defeats the point of clubbing, women go clubbing for male attention".

Luckily, Teddy isn't phased by these comments as it mean the events get more attention and she doesn't need to spend money on advertising.

In fact, she even sought out legal advice to prove the night would not be classed as discriminatory.

"We’ve had legal advice and because there’s a legitimate aim, it’s a legal exception under the equality act!" she says.

So what can we expect when the night finally arrives on Irish shores this summer?

"The best night of your life," she promises. "Freedom to wear and behave how you want, to feel comfortable, amazing DJs playing hiphop and R'n'B, and a lot of women and non-binary people."


popular
Irish teachers "can't even string a sentence together"
The 2 Johnnies share catfish story that leaves listeners shocked
Is your toddler waking too early? Do these 4 things
Mum horrified after finding a knife inside the box of a doll she was buying for her daughter
Laverne Cox makes history with the first ever Trans Barbie doll
Young mum and her 3-year-old son pack their bags to travel the world
Dealing with sick tummies, sore heads or high fevers? We've got the perfect solution...
You may also like
1 year ago
The Paddy Box has created the ultimate Girly Night box and we need one ASAP
5 years ago
We've Seen The Ab Fab Movie... And It's FABULOUS, Sweetie
5 years ago
Three Dublin Girls Nights Out We all Deserve Right NOW!
3 days ago
This is why Caitlyn Jenner wasn't invited to Kourtney's wedding
3 days ago
19 Kids and Counting's Josh Duggar sentenced to 12 years for child abuse images
3 days ago
"I'm surprised": Mother of Texas school shooter speaks out
Next Page