There have been plenty of Disney remakes over the years.

But none left us as awestruck as the recent Beauty and the Beast blockbuster, starring Emma Watson and Dan Stevens.

Ever since it left cinema screens earlier this year, we've been hoping for another chance to see the magic of the musical film.

And now it looks like our Disney dreams really have come true.

Whether you find yourself humming along to Be Our Guest or Belle from the Alan Mencken-scored blockbuster, you won't want to miss out on this.

Disney In Concert will be brining Beauty and the Beast to the Bord Gais Energy Theatre next year - and we couldn't be more excited. 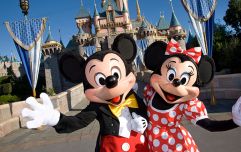 END_OF_DOCUMENT_TOKEN_TO_BE_REPLACED

Audiences in the capital will have a chance for an enchanting evening, as they relive the magic of the live action adaptation of the 1991 animated Disney classic.

The one night show will see a full orchestra playing the soundtrack to the film, while the live action movie is displayed on the big screen behind it.

Tickets are priced beginning at €54.65. They go on sale at 9am on September 22 through the usual outlets.

popular
Brian Dowling: "Aoife never thought the baby was hers"
Lauren Graham shares who she thinks Rory's baby daddy is
Warning issued to Irish parents after increase in RSV cases
Release date for Prince Harry and Meghan Markle's Netflix series confirmed
7 Christmas markets and Santa experiences to visit with kids this winter
Cameron Diaz gets honest about becoming a mum in her 40s
Expert says Cocomelon acts "as a drug" to kids' brains
You may also like
3 weeks ago
Disney's Christmas ad features an Encanto star and will have you bawling
4 weeks ago
Disney debuts first 'plus-size' heroine in new trailer
6 months ago
Zac Efron teases a High School Musical reboot
7 months ago
Cole Sprouse says childhood fame "is a trauma", particularly for young girls
8 months ago
WIN! Disney+ exclusive The Ice Age Adventures of Buck Wild goodie bag
8 months ago
Parents react to period products in Disney’s Turning Red movie
Next Page