Can we all just agree that the year and a half we have just lived through – between homeschooling and lockdowns and working from home really has been so, so stressful.

I have my own full-time job, yet I also found myself being a teacher for a 7-year-old and a 10-year-old. And if that wasn't enough, I also have also had to make sure dinners were made, laundry folded, house cleaned – on top of being a teacher, entertainment officer, DIY hairdresser etc., etc.

My plate has been more than full this past year, it has been overflowing – and we have all been in that same, crazy boat.

And much as us mums really are superheroes, we are also human, and we get stressed out like everyone else.

The problem with allowing mums to get this stressed out? It affects our children – in more ways than you might realise.

According to The American Institute of Stress, mums' stress and negative feelings can 'rub off' on their child.

Children can often be seen as sponges, and in a way, they soak up everything around them. Including being aware if mum is feeling extra stressed that day. It also doesn’t appear to matter how hard mothers try to hide their feelings from their children. And even if we slap on a smile and carry on as normal, children are still able to pick up on what you are feeling, and it can still be passed on.

According to Forbes, when a child can sense and pick up their mother’s stress, it can come out in 'bad behaviour' that mums might not realise have anything to do with how they are feeling. Meaning – managing your stress when you are a mum is actually more important than you think. 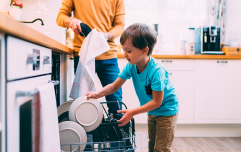 END_OF_DOCUMENT_TOKEN_TO_BE_REPLACED

Interestingly, fathers' mental state don't seem to have the same effect on their children, according to Science Daily.

Studies showed that fathers did not transmit their stress as much as mothers did, and they believe that is because fathers generally always suppress their emotions in front of their children.

The theory is that children are used to dad being 'fine' when he is really not, but they are not used to it from mum. Mothers generally show their emotions much more, so when they try to hide them from their children, the kids pick up on it.

As in, it is more 'abnormal' to hear mom say that she is 'fine' when she really is not.

So this summer, guys – try to make sure you give yourself some TLC. Catch a yoga class. Meet up with your friends and vent. Go for run. Walk barefoot in the grass. Start swimming in the sea. Read all the books. Whatever it takes to make yourself feel less stressed and more centred – it will be worth it. Not just for yourself – but for your entire family too.


popular
Prince William and Kate concerned about what the future holds for George
Three people arrested on suspicion of murder after five-year-old boy is pulled from river in Wales
Love Island's Malin Andersson announces pregnancy after baby girl's death
Kit Harington says you "don't get a break" from parenting
3 soothing homemade ice lollies for teething tots... whatever the weather
Donegal child hospitalised following dog attack
Former Belvedere student says abusive Fr. Joseph Marmion "targeted kids with health issues, whose families weren’t rich"
You may also like
2 days ago
A survey has revealed that grandparents are cooler than ever before – and we well believe it
2 days ago
The trick for getting chewing gum out of hair all parents need to know about
3 days ago
Mum confession: The pandemic made me realise I don't want to go back to busy
5 days ago
“The message that the world is unsafe has a profound impact” - Psychotherapist on the danger of attachment disorders
6 days ago
“I gave my mom boundaries when I had my kids” - TikTok star says we don’t owe our parents anything
1 week ago
"Can we have it all?" The question I ask everyday as a working mum
Next Page