Fans are LOVING it.

Chrissy Teigen and John Legend's daughter is celebrating another big moment this year.

The toddler, who turned 2 in April this year, became a big sister to now-3-month-old brother, Miles, in May - and now she's starting school.

Her mum shared an oh-so-adorable photo of the toddler's first week of preschool, which melted the hearts of fans.

Teigen's photo showed Luna standing outside on a sunny day, clutching a mini-family photo album - which reads Luna on the cover - in her hands.

She captured the image:

"They had us make a little family photo album she can look at when she’s sad or upset. She loves it. 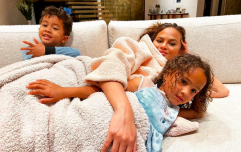 END_OF_DOCUMENT_TOKEN_TO_BE_REPLACED

Many called the idea of the photo album "the cutest idea", while others lamented the fact that "time goes by so fast" - and that they couldn't believe Luna was already in school.

And fellow celeb mama-of-two, Mariah Carey, even weighed in on the photo, calling it "so cute".

It's not the only post that the cookbook author shared of Luna's first day at school.

Later on, she added a video where she was asking Luna what she had done at preschool that day.

Her mum asked her what she had done that day, to which Luna initially replied: "I fell down on my forehead."

Chrissy corrected her daughter, reminding her that "no, that was in Bali", before asking what she had done that day.

Eventually, she got Luna to admit, "I pushed a boy" - to which her mum replied, "you did."

popular
These 40 baby names are set to trend in 2023
Bride asks for divorce day after wedding following groom's disrespectful cake stunt
'He's a changed man': Woman marries her 'high school bully'
Little boy dies of cancer after doctors ignored mother's concerns six times
Police believe they know what happened to missing dog walker Nicola Bulley
Viewers believe Bluey is a rainbow baby- check out the theory
Couple decide to live on cruise ship permanently after finding it's cheaper than paying mortgage
You may also like
2 weeks ago
Chrissy Teigen shares first photo of her baby girl and reveals her name
3 weeks ago
Chrissy Teigen and John Legend announce the birth of their baby
4 months ago
Chrissy Teigen reveals her miscarriage was actually "an abortion to save my life"
5 months ago
John Legend says he will "never forget" losing baby Jack
6 months ago
"Joy has filled our home": Chrissy Teigen announces pregnancy
9 months ago
Courtney Stodden says Chrissy Teigen still hasn't apologised for cyberbullying them at 16
Next Page