Co-sleeping with your kids (and pets) has its benefits

Six in the bed and the little one said roll over...

About half of all pet owners share their beds or bedrooms with their pets at night. Although this has been the case through the ages, very few studies have been done about the benefits and drawbacks of this practice. Until now, the majority of studies about co-sleeping have been limited to the bedtime arrangements of parents and their children.

A new article, published in the scientific journal Human Nature, argues that modern society is unnecessarily nervous with regards to both human-animal and adult-child co-sleeping. Psychologist and lead author Dr Bradley Smith of Central Queensland University in Australia, says that these concerns should be set aside because both practices have their benefits.

Sleeping arrangements between humans have evolved over time and across cultures. In medieval Europe, for instance, sleep was a public and communal affair. It was not uncommon to receive visitors in the bedroom, or for many people to sleep in the same bed. Sleeping with others was a way to increase personal security, conserve resources, and generate warmth.

Co-sleeping with children from birth is still the norm in many cultures, for instance in Egypt and among indigenous cultures in unindustrialised populations. Intergenerational co-sleeping is generally more prevalent in Asian countries than in contemporary Western cultures. 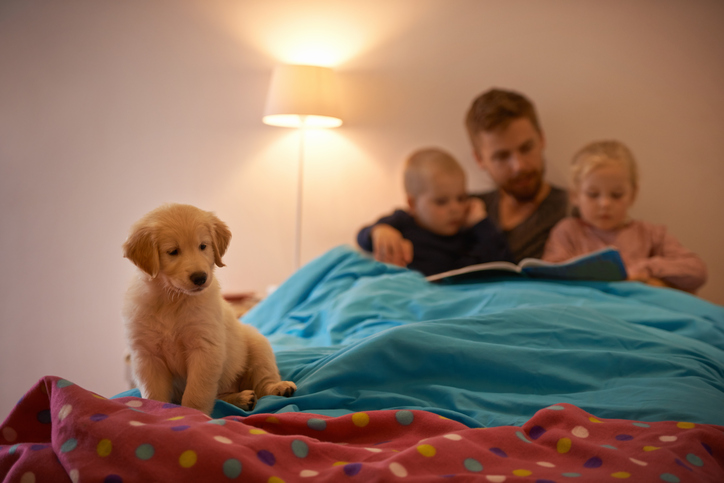 Nowadays, in the West, sleep is regarded as an individual and private experience that helps the body and mind to rest and recuperate. The shift from sleep as a public and social affair to a private one arose through a complex 'civilising' process that started in the Victorian era. Social norms and rules began to dictate that each person should sleep in a single bed, in a private place away from public view, and wear appropriate sleeping attire. This gradually introduced the concept of the private bedroom and private sleep to many social classes.

In their article, Dr Smith and his co-authors use dogs as an example of human-animal co-sleeping. They compare human-canine sleeping with adult-child co-sleeping and argue that both forms of co-sleeping share common factors for establishment and maintenance, and have similar advantages and disadvantages. END_OF_DOCUMENT_TOKEN_TO_BE_REPLACED

According to the Australian researchers, current apprehension about human-animal co-sleeping and bed sharing between parents and their children focuses too much on possible negative aspects or consequences, such as poor health, impaired functioning, the development of problematic behaviour, and even sexual dysfunction:

"Apart from its clear reproductive function for the survival of the species, as well as physiological support for the quality and quantity of sleep that are essential to individual health and well-being, co-sleeping fulfils basic psychological needs and reinforces and maintains social relations. Throughout history, humans have shared their sleeping spaces with other humans and other animals."

Smith also believes that more research should be done on human-animal co-sleeping practices:

"Human-animal and adult-child co-sleeping should be approached as legitimate and socially relevant forms of co-sleeping. A comprehensive understanding of human-animal co-sleeping has significant implications for human sleep, human-animal relations, and for animal welfare."


popular
Teen who put her newborn in a bin tells court of "regular beatings" from her father
Looking after grandkids can add 5 years to grandparents' lives
Man reveals he spent an hour trying to save Irish girl (7) in Majorca
Tipperary tragedy: Eldery man died from natural causes
Get ready! Casa Amor is happening sooner than you think
Operation Transformation reveals she has given birth to a baby boy
6 fun things to do in Dublin on your next family day out
You may also like
2 days ago
Less camps and activities: Here's why you should let your children be bored this summer
4 days ago
Staying connected: 25 easy ways to bond with older kids, tweens and teens
1 week ago
Children are spending more time on screens than ever but are they picking up this addiction from us?
1 week ago
Parents of children with severe sunburn should be fined for neglect, doctor claims
1 week ago
Teacher explains why children should never hand out birthday invites in class
1 week ago
I'm 30, have a child and still live at my mum's house - I don't plan on moving out
Next Page