Coronation Street's Mikey North and his wife Rachael have shared the first photo of their newborn daughter - and her name is just adorable.

They welcomed their second child together back in September. The couple already have a two-year-old son, Archie.

The proud parents released their first photos as a family of four through OK! Magazine, where they also announced their daughter's name: Eliza.

In the interview, Rachael also spoke about how the labour had been a bit "bizarre".

“I ended up being 16 days overdue, which was ridiculous," she explained. “They decided to finally induce me but we had to wait a few days for a bed to become free.”

What a gorgeous family! @coronationstreet star Mikey North who plays bad boy Gary Windass has welcomed a beautiful baby girl called Eliza with his wife Rachael and the pair talk all about it in this week’s issue of @ok_mag. Don’t miss out! ?? . . . . . #coronationstreet #garywindass #mikeynorth #itv #soap #okmag #okmagazine #celebrity #celebgossip 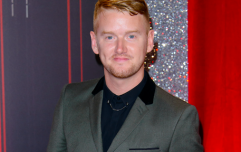 END_OF_DOCUMENT_TOKEN_TO_BE_REPLACED

The mum-of-two explained that it was "bizarre" to know she would be going into the hospital to be induced, rather than going into labour naturally.

“It was like having a casual appointment and then leaving with a baby," she added.

Mikey, meanwhile, said that it had been the "longest 16 days ever", adding: " It was like waiting for the end of time!”

Rachael and Mikey tied the knot in Worcestershire in 2016, three years after they met. They welcomed their first child together, Archie, in 2017.


popular
Doctors were shocked to find baby boy born clutching his mum's contraceptive coil in his hand
Unstructured play is vital for kids, so we need to stop entertaining them
The 30 baby names that are going to be super popular in 10 years time
H&M to close 170 stores this year due to dropping sales
Bedtime confession: I lie down with my children until they fall asleep - every night
Totally tropical baby names inspired by Hawaii
Jane Darcy's Intimate Moments collection is the perfect addition to any home
You may also like
3 months ago
Corrie's Jack P. Shepherd shares throwback photos to celebrate 20 years on the soap
3 months ago
Real life Corrie couple Sally Carman and Joe Duttine have gotten engaged
4 months ago
Corrie's James Burrows has landed his first role after leaving the soap
4 months ago
Coronation Street star 'in self-isolation' over coronavirus worries
4 months ago
'The hardest goodbye': Corrie's Lucy Fallon pays tribute to Bethany Platt as her final scenes air
4 months ago
Coronation Street's James Burrows shares details about Ali Neeson's exit storyline
Next Page