Dee McNamara and Jim Haide live in Blessington with their seven-year-old daughter Julianne, who has Down syndrome and has not been seen by a HSE Speech and Language Therapist in over 18 months. 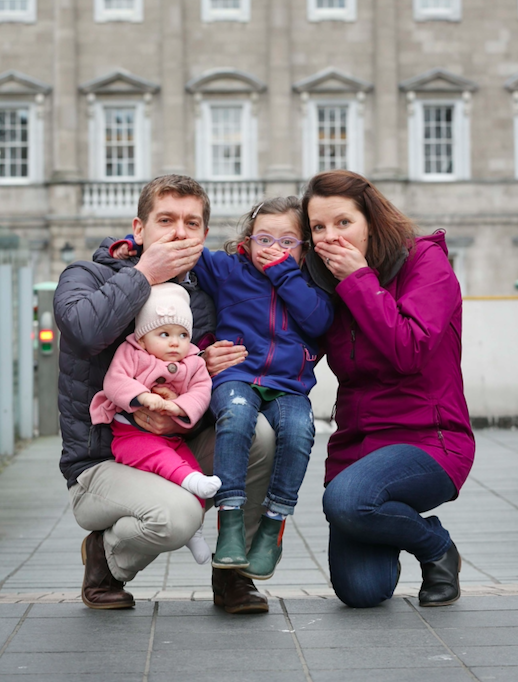 Today marks World Down Syndrome Day. Earlier this week, parents Jim Haide and Dee McNamara were pictured outside Leinster House with their seven-year-old daughter Julianne and her 10-month-old sister Elsie. The family, from Blessington in Co Kildare, wish to highlight the fact that thousands of children with Down Syndrome are being denied their basic right to communicate and develop their speech and language skills.

"They're not replacing Speech Therapists who go on leave or finish up, until January we were 18 months without a Speech Therapist. Then we got another letter saying that Julianne won't get seen until April. There's never an explanation, I assume their caseload and waiting lists are just too big.

It's a constant struggle because on one hand we are afraid to turn down the courses they are offering us, in case they think we're not interested in accessing services anymore. But what they are offering is not suitable. It’s not the one-on-one therapy she needs."

At present, Julianne avails of subsidised Speech and Language Therapy services through the Kildare branch of Down Syndrome Ireland. In order to cover the costs, Jim, Dee, and other families fork out €720 to access the fortnightly sessions.Private Speech and Language Therapy services cost €100 per session, meaning that getting Julianne the help she so desperately needs will cost the family €2,400 a year. Dad Jim told HerFamily that it feels like his daughter has been abandoned by the State:

"Without Down Syndrome Ireland’s Speech and Language Therapy services in Kildare, I really don’t know what we would do. It sometimes feels that because Julianne has Down syndrome, she's pegged into a hole that she's not going to succeed.

It feels like the State is telling my daughter that she can't succeed in life, simply because she has Down syndrome. Imagine what that feels like - that your child is forgotten and not even worth bothering about?"

The HSE website states that their Speech and Language Therapists provide assessment, diagnosis and therapy for children with a wide range of communication difficulties. They advise that children with communication difficulties which are secondary to a more significant primary difficulty are "referred to a more appropriate service where their ongoing or complex needs are better met by multi-disciplinary team."

Every year, Dee organises a table quiz in order to raise funds for the Kildare branch of Down Syndrome Ireland to avail of extra services. The quiz raises approximately €15,000, covering the cost of Speech and Language Therapy for just six children.

Julianne attends a mainstream primary school, St. Mary’s Junior school in Blessington, who are a great support according to the Haides:

"The school are great, they are very supportive and do everything they can resource-wise. We can't understand why the government won't use their resources more wisely. If they're this short on Speech and Language Therapists they could have one SLT visit her resource teacher and give her some guidance or train her on what to do, on what Julianne needs. Why can't a Speech Therapist come out to schools even once a month?

It is almost assumed that speech issues are 'just her lot', whereas a child with a more straightforward speech problem would probably get seen and assessed quicker.

Our daughter shouldn't expect less from this country just because she was born with Down syndrome."

popular
Breaking is the haunting novel parents need to read this October
Coco Austin comes under fire for bathing daughter (6) in sink
Here's everything coming to Netflix this October
80% of Irish kids aged 13-17 have experienced sexual harassment
Lynn Egar will appear in court next week after being charged with murder of children
Mum fined for taking her daughter out of school to go on holiday
Riverdale actor Ryan Grantham charged with murder of his mother
You may also like
3 days ago
TV presenter praises royal children – and claims most parents today are raising 'spoiled brats'
1 week ago
Positive parenting: 5 signs you are doing a great job as a parent
1 week ago
Some things definitely 'not' to do if you've been up all night with the baby
1 week ago
The Terrible Twos: One mum's advice on coping with this big parenting milestone
2 weeks ago
I am a tween mum now – and here is what I have learned so far
2 weeks ago
How to get your child to behave - without time-outs, shouting or bribery
Next Page