Dear mums, here's the incredible thing your voice can do to your child’s brain

Disclaimer: I am a really chatty person.

As in; it can be hard to get me to shut up at all. Which means, of course, that when I was pregnant with both my babies, they would have gotten well used to hearing my voice as they were growing away in there behind my belly button.

I remember when they were both born, there were a good few people in the room, between myself (of course!), my husband, two midwives, a student midwife, and, on my little girl, a doctor too. There was chatter and noise and happy tears. But the moment I spoke, my voice seemed to cut through the chaos, flow into their tiny little ears and they would turn their heads to look at me, to lock eyes with their mam.

At that moment, when our eyes melted into each others and my heart burst open and my voice kept talking to them, it was like someone has sprinkled the room with magic.

The thing is, though, as much as I like to think of it as magic, this response is actually rooted in science.

According to a study in the journal Proceedings of the National Academy of Sciences, a child’s brain has stronger responses when exposed to their mother’s voice versus the voice of a stranger — even if the mother is speaking nonsensical words for even a fraction of a second!

And guess what? You child's brain and body aren't the only things affected by your voice. Just by speaking, you are also soothing their emotions. This is what lead author of the study and an instructor of psychiatry and behavioural sciences at Stanford University School of Medicine, Daniel Abrams, had to say:

“We know that hearing [their] mother’s voice can be an important source of emotional comfort to children. Here, we’re showing the biological circuitry underlying that.” 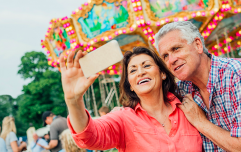 END_OF_DOCUMENT_TOKEN_TO_BE_REPLACED

When you think about it, we are pretty much always using our voices when we comfort our children, even when we are also hugging them or kissing away any boo-boo's. They need both.

To study the theory that the mother’s voice has a key role in the emotional and social development of a child, brain scans were done on 24 healthy children, between the ages of 7 and 12. The children were exposed to clips (lasting less than a second) of gibberish words spoken by their biological mother, and clips recorded by two women the children did not know.

Ninety-seven percent of the time, the children were able to identify the voice of their mother.

To further that, it wasn’t just the child’s listening skills that lit up when exposed to their mam’s tones; parts of the brain connected to emotions, rewards, and facial recognition also perked up their metaphorical ears, much more so than when exposed to the strangers’ voices.

The researchers believe this happens because there is a correlation between the children recognising their mother’s voices so rapidly, and the increased activity of so many areas of the brain — specifically the area of the brain linked to rewards. They suggest the brain becomes trained to latch on to the voice of the mother so quickly so it can attempt to get some rewards from her.


popular
Teen who put her newborn in a bin tells court of "regular beatings" from her father
Looking after grandkids can add 5 years to grandparents' lives
Man reveals he spent an hour trying to save Irish girl (7) in Majorca
Tipperary tragedy: Eldery man died from natural causes
Get ready! Casa Amor is happening sooner than you think
Operation Transformation reveals she has given birth to a baby boy
6 fun things to do in Dublin on your next family day out
You may also like
2 days ago
Less camps and activities: Here's why you should let your children be bored this summer
4 days ago
Staying connected: 25 easy ways to bond with older kids, tweens and teens
1 week ago
Children are spending more time on screens than ever but are they picking up this addiction from us?
1 week ago
Parents of children with severe sunburn should be fined for neglect, doctor claims
1 week ago
Teacher explains why children should never hand out birthday invites in class
1 week ago
I'm 30, have a child and still live at my mum's house - I don't plan on moving out
Next Page