Ear Piercing: How young is too young to pierce baby's ears?

When are they old enough to decide?

A quick straw poll today revealed that the majority of parents think that seven or eight is a decent enough age to allow kids to have their ears pierced. Some said 10 or 12 is a more reasonable stage, with many saying children should at least be old enough take on the responsibility of the maintenance required to keep infections at bay.

And, of course, some think the answer is 'never'.

For many, the decision is not about aesthetics, but culture as Sharon Hayden explains:

"When we lived in Dublin City, Jacob attended a local creche and his best mate was Mia. They were mad about each other and I have all the photos to prove it. Mia was gorgeous, pretty and had a fantastic laugh, just like all the other little girls at the centre but there was one difference between her and the other two-year-olds in there: she had her ears pierced.

"I never really thought about it or commented on it - mostly because it was none of my business - but also because I understood that it was a cultural thing. Her mum was this gregarious Spanish woman whose laugh could carry you down to the nearby coffee shop and back again, and whose hugs were the most genuine of anyone else's I have ever encountered. 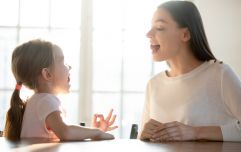 END_OF_DOCUMENT_TOKEN_TO_BE_REPLACED

I enjoyed witnessing the subtle cultural differences between her toddler and mine, from the amazing clothes she had brought over from Spain, to picking up a few Spanish words and phrases, even to the incredible baby perfumes that Manuela spritzed over her daughter's clothes every morning. Mia always smelled amazing. In certain continental countries such as Spain, babies can have their ears pierced as young as days old. One ex-Pat pal of mine living in the Canaries tells me that babies can have the piercing done before they leave the maternity hospital."

Over the years, there have been various petitions calling for a ban on ear piercing in very young kids. One person's 'cruelty' is another's culture, what is the answer?

What do you think? Join the conversation and let us know where you stand on this issue.


popular
Further details emerge on abandoned Texas kids found with skeletal remains
Have kids, they said... 11 photos that'll make you feel better about your day
Can you pronouce these 7 'unique' baby names? They're trickier than you think
WATCH: Littlewoods Ireland’s Toy Tester Hannah has her say
Tony Holohan warns parents not to use antigen tests on children
This 23-year-old is mother to 21 kids... and she wants MORE
3 abandoned kids and skeletal remains of 9-year-old brother found in Texas
You may also like
18 hours ago
Painting with cars might just be the most perfect rainy afternoon activity ever
1 week ago
Opinion: Unstructured play is vital for kids, so we need to stop entertaining them
1 week ago
Apparently, getting your kids up and ready for school is equivalent to an extra day's work
1 week ago
3 fun (and relatively mess-free) bath time tricks every parent should be armed with
1 week ago
The internet is praising this mum's life lesson for her ungrateful daughter
1 week ago
Expert claims parents should stop lifting baby's legs when changing their nappy
Next Page