Fancy a Quickie? 3 Sex Positions For When You Don't Have The Luxury of Time

As parents, you will know that it's hard to find alone time. You will also know that sex doesn't happen as often.

But that's where 'the quickie' comes in.

All you need is a small amount of time and some fast moves. You find the first element, here is the second...

As long as there’s something to sit on – such as a chair or the bathroom sink – this position is perfect. With the man sitting down, the woman backs up between his legs and lowers herself onto him. You either go up and down or back and forth, depending on what tickles your fancy.

Up Against The Wall

It can be done literally anywhere and doesn’t necessarily require the woman to have both feet off the ground. She can simply lift one leg up as her man pins her up against a wall. It might not deliver on longevity but it definitely delivers on intensity. 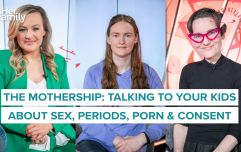 END_OF_DOCUMENT_TOKEN_TO_BE_REPLACED

It’s a classic and is equally satisfying for both sexes. The woman is on all fours as the man kneels behind her, entering her. An alternative is with both of you standing while the woman bends over at the waist and the man enters her from behind.

For more sex positions, including for when you're both just too exhausted to put in the effort, click here.


popular
Midwife tragically dies in front of her children on flight
How soon is too soon to leave your new baby for the first time?
Maura Higgins reveals she was sexually assaulted by taxi driver in Ireland
Search underway in Ireland for missing 11-year-old Ukrainian girl
This mum's post about dying to send her kids back to school is too funny
Kourtney Kardashian slammed for putting son in danger during boat trip
Here's where you can get the best deals on all your Back to School essentials
You may also like
11 months ago
A clinical sex therapist says these are the best positions during pregnancy
11 months ago
Study reveals one in five boys 'neutral' on consent being needed before sex
1 year ago
Everyone's going wild for Netflix's Sex/Life
1 year ago
Man says he won't make women orgasm unless he plans on marrying them
1 year ago
Having sex could alleviate hay fever, according to experts
2 years ago
Couples who have more sex are less stressed, according to study
Next Page