This is an eye-opener.

As parents, our children's safety is paramount, which is no doubt why this fireman's post recently went viral.

A US firefighter took to Facebook to share two photos of different doors that'd been in a fire – one that'd been left open and one that was closed – to show parents the dramatic difference closing your child's bedroom door at night could make. 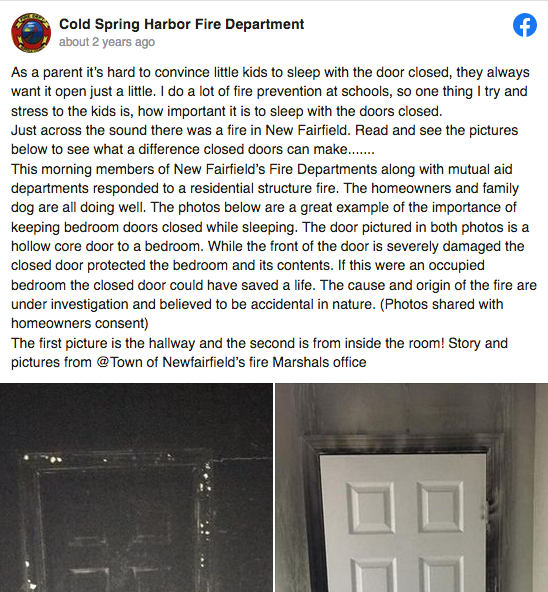 The post, which was uploaded to the Facebook page of Cold Harbor Fire Department in New York, in the U.S.A, says closing your child's door at night 'could save a life'.

According to the fireman, keeping your child's door closed at night can be the difference between life and death, as it can prevent flames and smoke from spreading quickly in the event of a fire.

The post has two images attached. In the first image, we are shown the first door, which was shut when a fire broke out – and that hadn't been engulfed by the flames. In the second photo, we see a second door, or more so, the charred remains of another door, in the same house, which had been left often during the fire. 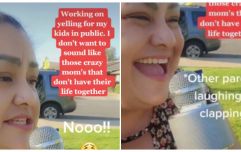 END_OF_DOCUMENT_TOKEN_TO_BE_REPLACED

‘Read and see the pictures below to see what a difference closed doors can make."

He goes on to explain:

"This morning members of New Fairfield’s Fire Departments along with mutual aid departments responded to a residential structure fire. The homeowners and family dog are all doing well."

"The photos below are a great example of the importance of keeping bedroom doors closed while sleeping. The door pictured in both photos is a hollow core door to a bedroom. While the front of the door is severely damaged the closed door protected the bedroom and its contents. If this were an occupied bedroom the closed door could have saved a life."

Did you know this, parents? Were you aware that it is safer to sleep with the doors closed?


popular
A mini heatwave could be coming our way in September
Vogue Williams slams man who refused to swap seats with her on plane
Mum issues warning to parents over frightening Cocomelon video
Here's how you can get "free money" from Revolut
Inside Prince William and Kate's beautiful new home in Windsor
Katie Piper rushed to hospital for emergency operation
Man (50s) arrested on suspicion of the murder of Miriam Burns
You may also like
17 hours ago
Toddler tries running away from home – because Cocomelon was turned off
1 day ago
Teachers sexualised my 9-year-old and shamed her over the swimwear she wore
1 week ago
Osteopath shares mesmerising trick that calms colicky baby in an instant
1 week ago
Creative mum reveals tricks to occupy kids on weekends without spending money
1 week ago
Parenting influencer accused of exploiting her toddler and attracting predators
2 weeks ago
Sonya Lennon reveals ‘judgement’ her daughter, 17, experienced when buying pregnancy test
Next Page