"What a great idea!" Mum shares unusual way she keeps her toddler safe in a crowd

When he was a toddler, my little boy had a terrible habit of getting out of his buggy and hiding under clothes racks and rails when we were in a shop.

And even though he was never too far away, and – thank God – nothing scary ever happened – those seconds when you lose sight of your child when out in public, and especially somewhere busy, are just horrendous.

I am sure most toddler parents can agree.

Having a child go missing is every parents' worst nightmare – but thankfully something that is rare.

However, there is no harm being prepared, I think we can all agree – and I must admit, I was recently impressed with this idea a UK mum came up with to help keep her daughter safe, should she wander off while out and about.

Lauren Graham from Sunderland recently took to Facebook to show off the anklet bracelet she made for her toddler to wear, which displays her phone number.

And while the idea won't prevent your child from walking off, of course, it will no doubt make it easier for anyone who finds them to contact you and get you reunited. 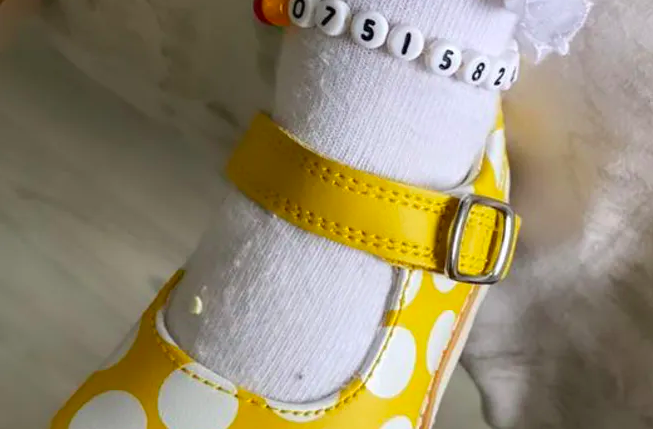 Speaking to Netmums, the 30-year-old pregnant mum of two explains:

'I just wanted to share this with everyone for when we’re all out and about. My 14-month-old daughter wears this around her ankle.

END_OF_DOCUMENT_TOKEN_TO_BE_REPLACED

'It has my phone number on was she ever to wander off. She doesn’t mind wearing it at all.

'I saw it years ago when my eldest son, who is now 10, was only a baby but it was just written onto a felt band and when we tried it the numbers kept fading so we found some number beads and decided to make a little bracelet.

'We use it everywhere we go now especially with her being a toddler and wanting to wander off herself.

Graham points out that some parents have been critical.

'I did have the usual people say the beads are dangerous however the beads I use are around one mm in size, much smaller than a button on a baby cardigan.'

Other parents were impressed with Graham's idea:

'What a great idea!"

"Great idea. I used to use the stick on ones. This is far more reusable."


popular
14-year-old boy drowns at hotel in Turkey after family wedding
Body of woman discovered in unexplained circumstances
Inside Prince William and Kate's beautiful new home in Windsor
Should schools consider introducing a three-day week?
Five teenage girls rushed to hospital after crash in Kilkenny
Baby clothes from Shein and AliExpress have dangerous levels of harmful chemicals
Expert says Cocomelon acts "as a drug" to kids' brains
You may also like
5 days ago
How soon is too soon to leave your new baby for the first time?
1 week ago
If you could have a "parenting do-over", what would you change?
1 week ago
These are things police officers wish you’d teach your kids to keep them safe
2 weeks ago
I tried a viral 5-second trick that promised to make me a happier, calmer parent
3 weeks ago
I kicked my daughter's friend out of her birthday party- was I wrong?
3 weeks ago
Mums are sleep deprived for six years after having a baby – and yet dads are not
Next Page