Klaus arrives on Netflix this week and you need to watch it.

As much as I love watching my kid's Christmas classics like Home Alone and The Grinch come December, I'm always a little apprehensive of new festive family films.

It's going to make me sound old but most of the time I just don't think modern movies match up to the magic of the ones I grew up with.

I didn't think that there would be any new release that I would want to add to my must see Christmas list. That was until I saw Klaus.

The film tells the tell of spoiled Jesper whose father sends him to a far off island above the Arctic Circle to prove he can start a successful postal system. If he doesn't he'll be cut off from his lavish lifestyle.

A coincidental run of events leads to Jesper befriending a reclusive toy maker called Klaus and helping him to deliver toys to the children of the island.

As things progress we see the good coming out in all of the main characters and towns folk but could it all come crumbling down if people realise Jesper started his good deed just so he could return home? 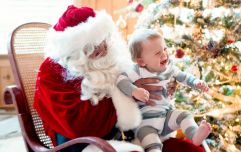 END_OF_DOCUMENT_TOKEN_TO_BE_REPLACED

Klaus is really clever and witty and I was definitely laughing as much as the kids watching it. It actually reminded me a lot of The Emperor's New Groove in it's comic appeal to both children and adults alike.

My two-year-old was glued to it the entire time which is a great feat as she usually never sits steady to watch anything.

The film also touches on some difficult issues including infertility and loss as we learn why Klaus become a recluse to begin with and why he started making toys.

As a family film Klaus has the whole package. A magically retelling of the origins of Santa, buckets of humour, moral dilemmas and a lot of heart. To be honest if you asked me to choose one word to describe Klaus I would say heartwarming and sure what else do you want your Christmas movie to be?

I would highly recommend getting into your matching jammies grabbing a cup of hot chocolate and sticking it on with the kids.


popular
#MomLife: 7 things I wish I done more of when my children were babies
Here is what Center Parcs Ireland have said about reopening this summer
Suffering with hayfever? The very simple vaseline hack you need to know about
Hair SOS: 3 seriously amazing hair products saving my lockdown locks
Stacey Solomon has the most brilliant hack for avoiding messy mealtimes
Video of newborns doing the breast crawl shows just how natural breastfeeding is
3 super effective ways to get your child's attention (that doesn't involve shouting)
You may also like
5 months ago
Here's the age most parents tell their kids the, ahem, truth about Santa
5 months ago
How to track Santa on his way from the North Pole on Christmas Eve
5 months ago
We have Santa's official address to make sure your letters definitely reach him
5 months ago
From Santa Claus to Frozen 2, Liffey Valley has everything the family needs for a Christmas Day out
5 months ago
We love it - mum shares hack on getting kids to behave coming up to Christmas
5 months ago
A Santa Television YouTube channel exists and the kids are going to love it
Next Page