Four months since Hilary Duff gave birth to her first baby girl, Banks - the star is marking the milestone with the cutest snap possible.

Lying on the bed in a set of pyjamas, the mum-of-two captioned the photo:

"Sunshine bright light was 4 months yesterday! My little pixie is getting big nomnomnom"

Since giving birth, Hilary has spoken about the challenges of moving from one child to two and the importance of rewarding yourself for being a hard-working mum because "you deserved to be praised" and the little things you do don't go unnoticed.

Now heading back to work since giving birth, Hilary is back at Paramount Pictures filming for her series, Younger.

But it wasn't long until she got a surprise visit from her number one fan, who she's obviously finding tough to leave at home. 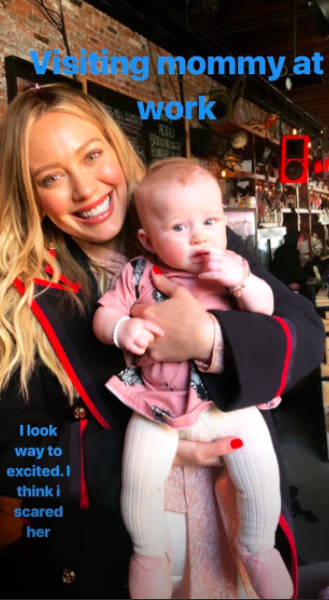 Younger just started production on its sixth season, which is set to air this summer.


popular
Gardaí concerned for welfare of missing 14-year-old Dublin girl
Woman's suitcase and bank cards stolen as she gives birth in Dublin hospital
5 family members, including parents, sentenced over sexual abuse of children
Mass murderer Anders Behring Breivik applies for parole for 2011 killings
Calls for child benefits to be taxed to help fund early years services
Daughter of missing Dublin woman issues heartbreaking plea
Newborn found dead in duffel bag outside US fire station despite safe haven law
You may also like
1 month ago
Instagram launches new features aimed at protecting teens
2 months ago
Reese Witherspoon corrects Diane Keaton for Instagram blunder of her son
3 months ago
Influencer charged with drugs trafficking after trying to board Dubai flight with cocaine
3 months ago
Mum reveals her daughter accidentally filmed her in the shower on Instagram Live
3 months ago
'Instagram Kids' halted amid backlash and mental health concerns from damning report
8 months ago
Mark Zuckerberg wants to launch an Instagram for kids – yes, really
Next Page