"It’s robbing that man of the opportunity to bond with his child."

New dads don't get to spend enough time with their newborns. They're expected to pop back into the office as if this life-altering thing hasn't turned their entire world upside down. A few days of cuddles, nappy changes, and a lot of tears, and bam, return to your desk, please.

It's the norm in our society, but Joshua Jackson is calling for a change.

The former Dawson's Creek star said expecting fathers to return to work is wrong. They're missing out on such valuable time with their baby and partner.

He told Mr. Porter: "I now recognise how perverse the way that we have set up our society is. There is not a father I know who works a regular job who didn’t go back to the office a week later."

"It’s robbing that man of the opportunity to bond with his child and spend time with his partner," he stressed.

The actor and Jodie Turner-Smith welcomed their daughter in April 2020. 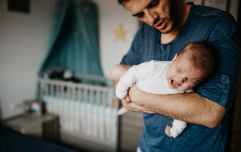 END_OF_DOCUMENT_TOKEN_TO_BE_REPLACED

Speaking of his daughter, he shared: "It’s 100 percent changed how I approach my work and my life. That has been made so clear to me in this past year. For me to feel good about what I’m doing day to day, my family has to be the central focus.”

The dad couldn't be more right. Both parents deserve to be together for those early days. Why does society expect dads to snap back to their normal routines?

In Ireland, fathers can take two weeks of paid paternity leave, but is that really enough? Fatherhood isn't like some two-week holiday to Spain, it's an entirely new role that takes a lot of getting used to.

Employers do not have to pay employees who are on paternity leave so many dads have no choice but to return to work. Surely it is time for a well-overdue change, right?


popular
6 fun things to do in Dublin on your next family day out
New dad called 'demanding' over list of guidelines to visit newborn son
"No co-sleeping at all" – new safe sleeping guidelines for babies states
Frankie Essex reveals the names of her twin babies
Stacey Solomon shuts down cheating rumours as photos of Joe's stag-do emerge
Girl (7) who died in Majorca was originally from Donegal
"Holding my own": Vicky Phelan shares update with her followers
You may also like
2 months ago
Prince Harry says he's a "proud papa" as Lilibet takes first steps
6 months ago
My wife wants to give our twin boys matching names and I think it's a terrible idea
8 months ago
Husband admits he's struggling after wife changed her mind about having kids
1 year ago
Ed Sheeran gets real about being a first-time dad
1 year ago
Dad who gave daughter's friend a pad at sleepover called a creep- was he wrong?
2 years ago
Father's Day: 10 celebrity dads on how fatherhood changed everything
Next Page