You know you're breastfeeding a toddler when....

From my experience, you know you’re breastfeeding a toddler when...

1. Your child finds new and interesting positions to nurse in

Before now, you had your go-to position, whether it was laid-back or a rugby hold, you had that position down. Long gone are the days when you felt so awkward, perfecting the latch and then meeting your baby’s eyes with a loving gaze.

Now? Feet in your face, feet in your mouth, feet in their mouth. Nursing has become a yoga extravaganza. You wonder to yourself “HOW THE HELL CAN YOU BEND LIKE THAT?!” In breastfeeding circles we call this act ‘Gymnurstics’. If only it was an Olympic sport.

Friend of the author, Meera Ui Chonghaile and her daughter Mahi

2. Your child thanks you

Especially when you don’t ever expect them to. The fact that they know it’s something they love and appreciate, innately astounds you.

With child hopping from “dis side” to “dis side” every ten seconds, you start to wonder if your boobs provide different flavours! Chocolate and vanilla perhaps?

They argue about who is getting which boob and agree on a compromise.

5. You post this infographic every time someone says there are no benefits to breastmilk after 12 months: 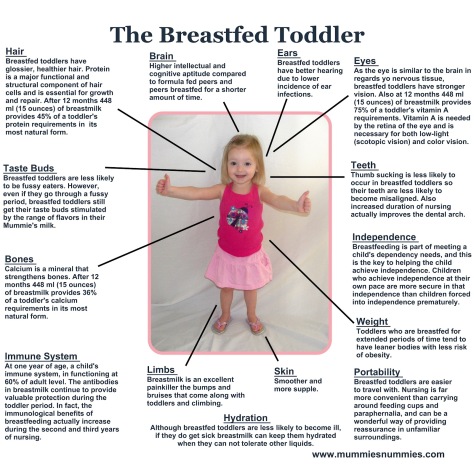 It’s actually crazy how many health care professionals tell mothers that nursing passed 12 months is only for them and there are no benefits to the child. As you can tell from the graphics above, there is an abundance of benefits in full term nursing. There is also amazing benefits for mom too. Check it them out below:

6. Your toddler has their own word for your milk

My little girl asks for “boob” at 17 months but I have heard the cutest ways toddlers ask for milk like “bainne,” “mama milk,” and”milkies,” to name just a few.

No matter how many people think it’s weird, gross or wrong, there is a biological purpose for nipple twiddling. Children twiddle nipples or slap mother’s breasts to stimulate the let down of the milk. However, many toddlers turn this into a game by seeing just how far mommy’s nipples can stretch out. It’s hilarious until you realise you haven’t trimmed their nails in awhile or you get sprayed in the face with your own milk. Hey, at least you’ll have some awesome skin!

8. You’re so amused when people find out you’re still nursing and they recoil in horror

It’s ironic, really, that mothers of breastfeeding toddlers are criticised yet full grown adults drink the growth fluid of calfs. Many people are under the impression that breastfed toddlers and older children are only being fed breastmilk. While yes, it is an amazing source of nutrition, children over a year do need to have a healthy diet of solid food in addition to mummy’s milk. A lot of people also believe (without any basis for their thoughts) that breastfed toddlers will be clingy and will have psychological problems when they’re older. This is not the case at all. Studies show that breastfed children are protected against mental health problems and addictions. They tend to be higher in intelligence and more emotionally secure than children who were not breastfed.

Following on from that...

9. When you’re asked how long you’re going to continue to nurse for

When somebody is being rude asking me that question, I’ll usually answer with something sarcastic like, “We will probably wrap it up when she starts college.” For anyone who is genuinely asking, I tell them that we will stop when we are both ready. It’s a two way relationship. Feeding a toddler makes life so much easier for us. I’m not sure how we would deal with tantrums and illness without breastfeeding. It really is the answer to so many problems.

10. When they learn how to unclip your bra and help themselves

This aspect of feeding a toddler is simply brilliant, especially at night. If you’re co-sleeping and breastfeeding, your child will eventually learn how to get your top open or up, and latch-on while you’re still sleeping. Studies show that mothers who breastfeed and co-sleep get more sleep than mothers who don’t. Who doesn’t love extra sleep?

11. Your toddler feeds their dolls/teddies/toy trains and even cats

There is nothing sweeter than seeing your toddler pretending to be mommy and lifting their top to nourish their baby dolls. It’s amazing to see natural instincts kick in when their babies are 'crying.' My own daughter recently chased the cat around the house with her top up screaming “nummy nummy num.”

If your toddler isn’t feeding their toy, they’re getting you to feed them. Lying down with your toddler latched on one boob and some inanimate object resting on the other.

12. Your toddler learns that other people have nipples too

Recently my daughter realised Daddy had nipples too. She stared at them for a few minutes. Daddy and I waited to see what would happen. Of course, I was trying to convince her that Daddy has milk too while he was trying to tell her he didn’t. After a couple of minutes, she opened her mouth (very reluctantly) and went for a taste. She was immediately put off my the hair that surrounds Daddy’s nipples.

13. Your toddler and your husband have a lot in common

The sight of bare boobies makes your toddler giggle, squeal and clap. Motor boating is also a favourite past time.

Feeding a toddler brings so much joy but quite often comments made on social media or from friends and family can be really off-putting. Women are called pedophiles and weirdos just for simply following their biological instincts and doing what is best for them and their child. It’s a sad reality that breasts are used to sell everything from cars to food but should a woman use them for their biological purpose, they are abused. Breastfeeding is in no way sexual and anyone who thinks so should take a class in biology. Would you scoff at a dog feeding her 8 week old puppies? In human years, that would equal to a toddler. Even cows, when left alone will feed from their mothers for up to four years. We don’t respect our mammalian instincts anymore.

We rarely see full-term breastfeeding in our everyday lives. Where we see it most is in films or TV shows and the characters are usually portrayed as really radical hippies or weirdos. Take Game of Thrones, for example. The feeding of a 10-year-old is pretty unrealistic. Children loose the ability to correctly latch at around aged seven. Ever wondered why they are called milk teeth? When a child looses their milk teeth, this is right about the age where they would naturally wean. Hence the natural weaning age is between 4 and 7. Portraying full-term breastfeeding in a negative way does nothing but hinder the acceptance or normalisation of the act.

There is no reason you need to stop feeding your baby once they hit 12 months, unless you want to. If it feels right for you and your baby, go for it and feck the begrudgers.

Yvonne Evans is a freelance journalist from West Cork. She is mother to AJ, and Ollie. In addition to juggling work and family life, Yvonne was diagnosed with a rare condition called Ehlers Danlos Syndrome (EDS) in 2013. Other diagnoses include Orthostatic Intolerance and Vasovagal Syncope, which are a result of her EDS. She shares her life story about dealing with family life while being chronically sick on her inspirational blog or catch up with her on Facebook or Twitter.


popular
River Island has come under fire for selling clothing that 'should not be for children'
Aldi to limit number of Christmas toys customers can purchase
20 Unisex Irish Baby Names That Are Absolutely Magical
No bake Frankenstein Cake Pops to make with the kids over the mid term break
Mask up: 10 super-cute facemasks we have our eye on right now
Can you pronouce these 7 'unique' baby names? They're trickier than you think
The zero carbs, four-ingredient bread that is breaking the internet
You may also like
2 weeks ago
"Will it hurt?" 10 honest questions every expectant mum has about breastfeeding
2 weeks ago
Preparing to breastfeed: 10 things breastfeeding experts want you to know
2 weeks ago
Breastfeeding: 10 things I wish someone had told me before I had a baby
2 weeks ago
12 of the best (and worst) foods to eat if you are breastfeeding
2 weeks ago
National Breastfeeding Week: 5 things you can do to support a breastfeeding mother
2 weeks ago
Survey shows breastfeeding expectations do not mirror reality for Irish mums
Next Page