The incident was captured on CCTV.

One mother is sharing her horrific story after she watched her four-year-old kill the family puppy.

Seeking advice from other parents about how to deal with her situation, the mum – going by the username mummyleah- posted her story on Mumsnet.

“We brought home our beautiful brown puppy seven days ago. Yesterday, I found her dead in my back garden,” the concerned mother wrote.

“I went upstairs to view the CCTV footage of my garden and saw my four-year-old son throw her out of the house, my poor baby instantly broke her back as she landed.”

The mum said her son looked shocked after his actions, ran over to look at the puppy, before running back inside to tell his older brother what he had done.

“My four-year-old grabbed a teddy and tapped our puppy numerous times, then they both went inside, came upstairs to me and said they were going to bed now so they wanted kisses and cuddles.”

With no idea of what had happened at this point, the mother admitted she tucked her boys in and it wasn’t until she noticed the puppy was missing later that she went looking.

Finding the body outside, the shocked mother gathered her children together to ask them about the incident.

“My four-year-old instantly said it was him in a very quiet voice. I did not deal with his punishment in the correct way.

“I shouted at him whilst in tears were falling from my eyes as I felt for the puppy not him. Today, he told his teacher and she has tried to talk to him about it.

"Because I did not handle it the best I feel I've made my four-year-old emotional messed up.

"Does anyone have any advice on what to say to him or what to do?" 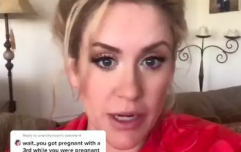 END_OF_DOCUMENT_TOKEN_TO_BE_REPLACED

Fearing she dealt with the situation badly, she asked for reassurance and guidance from her fellow mothers.

The mum’s plea for advice was quickly criticised as people began sharing their disapproval for her decision to leave her son with a puppy at such a young age.

The thread has since been deleted by the site’s admin after the debate turned very heated.


popular
Can you pronouce these 7 'unique' baby names? They're trickier than you think
4 ways to fix hard slime with ingredients you probably already have at home
Here are the 90s baby names we reckon will definitely swing back into fashion again
Apparently, 'boring sex' is more likely to get you pregnant with a girl
20 Unisex Irish Baby Names That Are Absolutely Magical
36 Heavenly Baby Girl Names Inspired By Astrology
Totally tropical baby names inspired by Hawaii
You may also like
13 hours ago
Dolphin seen in Galway Bay probably not Fungie
17 hours ago
Ryanair in breach of advertising rules over "misleading" and "offensive" Vax and Go ad
19 hours ago
Vicky Phelan "hopeful" as she receives first results from new treatment
1 day ago
Hilaria and Alec Baldwin have welcomed baby No. 6 — five months after baby No. 5
2 days ago
Breaking news: Man missing and young child rescued after a kayaking incident in Co Kildare
5 days ago
Scarlett Moffatt discovers ‘30% rain’ on weather app doesn’t mean chance of rain
Next Page