Mum does breastfeeding free-bleeding yoga and the photos are insane

Carlee Benear is a mum from Texas.

She's also somebody who practises breastfeeding, free-bleeding yoga though, so she's not exactly your run-of-the-mill mum-of-three.

Take a look at Carlee's Instagram page, 'CarleeBYogo,' and you'll be struck by a few different things.

The first is that the woman has some serious yoga skills, an insane body, and the ability to balance in a lot of positions that leave us writhing in pain just thinking about them.

The second is that her kids seem to absolutely love that their mum practices yoga while they're running about.

However, Carlee's yoga is a little bit different in that she doesn't just whip out a mat and do a few (very impressive) handstands.

She breastfeeds while she's doing it. And free-bleeds too. 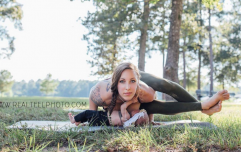 END_OF_DOCUMENT_TOKEN_TO_BE_REPLACED

If you're not familiar with the concept of free-bleeding, it involves menstruating freely, eg; without the use of tampons, sanitary towels, Mooncups, or anything or product.

Many women practice free-bleeding because they believe it makes them more in tune with their bodies, happier, and because they simply don't think that their periods are something that should be covered up or 'cleaned.'

In Carlee's case, she has said that she doesn't want to adhere to what society "shoves down our throats."

"Goddess forbid we even talk about our periods in public… everything must be smothered in white and kept perfectly clean and hidden."

Carlee also said that practising yoga has allowed her to menstruate more comfortably too.

popular
Dad asks public to forgive his wife after she killed their three children
16-year-old boy appears in court following murder of teenage girl
Colin Farrell says being nominated for an Oscar is "a bit of craic"
Little boy dies of cancer after doctors ignored mother's concerns six times
Fans call out Jake Paul for insensitive comment on Molly-Mae's baby announcement
Tributes pour in for 22-year-old woman killed in Mayo crash
Molly Mae says becoming a mum is the best thing that ever happened to her
You may also like
7 months ago
International Yoga Day: 7 incredible benefits kids can get from doing yoga
10 months ago
Is this Ireland’s most inclusive gym?
1 year ago
I am a yoga teacher, and use this mindfulness activity a lot with my own children
1 year ago
Michael D Higgins says he believes yoga should be taught to all school children across Ireland
1 year ago
Me-time for mums: A summer Solstice Yoga Retreat in County Wexford
1 year ago
Wellness: 3 easy yoga moves that will have a huge impact on your health
Next Page