Yikes! This mum's Elf on the Shelf prank spectacularly backfired

We are just a few days into December, but to many of us, that means we have already had to come up with several nights of elf antics.

However, for one mum, one of her attempts at being creative with what her little boy's elf got up to managed to raise some eyebrows.

UK-based Tanya Lee shares some of her inventive Elf on the Shelf hiding places with other parents on Facebook, but last year, the mum-of-one was criticised for taking things a bit too far. In fact, some even called her 'cruel' for her latest Elf prank, and claimed she had traumatised her son.

The 30-year-old admitted she appeared to be "a bad parent" after she convinced her five-year-old son Oscar that his toy Grinch had eaten the elf in their kitchen. 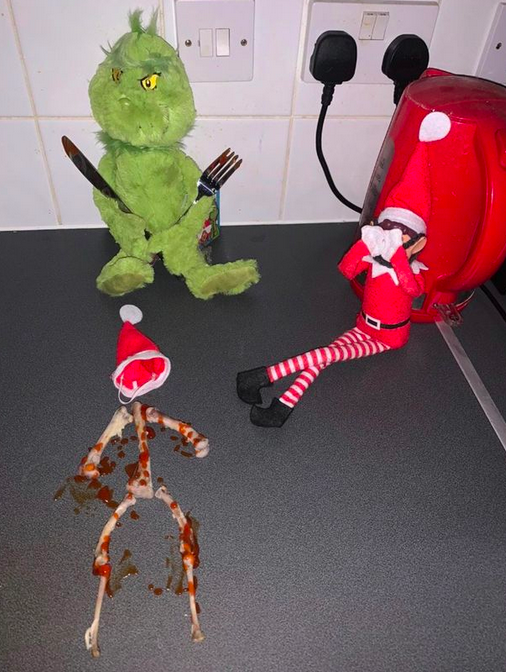 The hilarious photo shows bones leftover from a roast chicken in the formation of a skeleton covered in 'blood' beside the Grinch toy, who is holding cutlery as if it has devoured the elf.

Lee, who works as a carer, explained:

"We had had roast chicken on Sunday and the bones left a perfect elf-shaped skeleton so I thought I'd play this joke on Oscar. I went for it, and left the skeleton out as if the Grinch ate Elf on the Shelf."

However, having found this rather gruesome scene, Lee's young son was naturally rather upset.

"My little boy cried and cried," Lee explained. "He cried for half an hour. His first words afterwards were 'the Grinch shouldn't have eaten her. The Grinch is not allowed to eat her'. I had to open the cupboard and show him that the elf was actually hiding and that it was just a silly little joke."

END_OF_DOCUMENT_TOKEN_TO_BE_REPLACED

The little boy was relieved when he realised his elf was still alive, but is now very suspicious of his Grinch toy.

"He still will not look at the Grinch toy at all," Lee explains. "Every time I put the elf near the Grinch now, he moves it away. He knows he is not allowed to touch the elf but he moves the Grinch as he thinks the Grinch is going to eat the elf again." 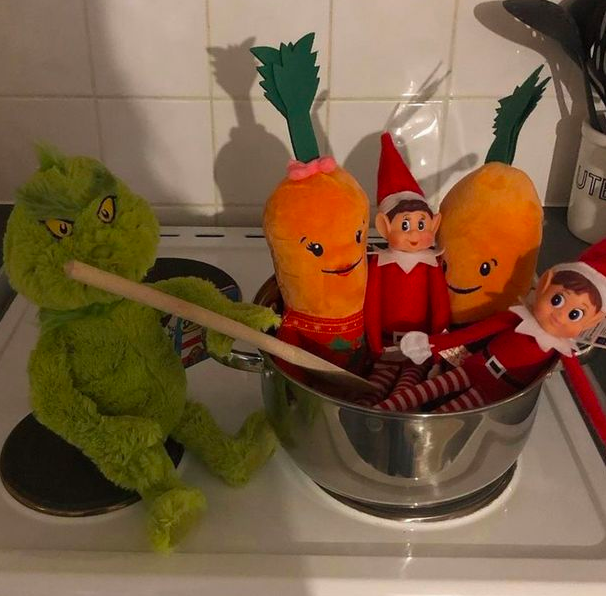 Lee explains she has used the Elf on the Shelf Christmas tradition since 2017, and has enjoyed sharing their antics with her followers on social media. However, after sharing this particular prank, the single mum says she faced a backlash online.

One follower posted: "That's a bit cruel. You shouldn't do that."

Another one said: "I'm not surprised he was traumatised. It's not a nice joke to play for a child."

Lee isn't too concerned about the criticism, however.

"It was funny. I laughed so much at it. I didn't think he'd react like that but it's still funny. I know I probably sound like a bad parent but it was too funny."

Explaining she knows her own child or can determine what he can deal with, Lee says to the Mirror newspaper:

"He's my child at the end of the day and if I think he can cope with it, then I'll do it. He can cope with it. I gave birth to my child so I know my child. He was fine with it. He cried for a bit but he was fine after that. People are good at being keyboard warriors. I don't mind a few negative comments though."


popular
"You're disgusting": Prince William roars at photographer who was 'stalking' his family
Michael Owen hilariously responds to Love Island's heart rate challenge
6 fun things to do in Dublin on your next family day out
Fashion expert tells mothers what to wear on school run to not look 'old and frumpy'
Family of Deborah James sadly announce that she has passed away
Mum gets mixed reaction to photo of her drinking beer while breastfeeding
Children wearing wrong-sized shoes and pyjamas in daytime as parents cut costs
You may also like
23 hours ago
Should I make my teenage daughter pay me for collecting her from work?
2 days ago
New dad called 'demanding' over list of guidelines to visit newborn son
3 days ago
"My parents are useless grandparents" – are today's grandparents too cool to babysit?
5 days ago
Less camps and activities: Here's why you should let your children be bored this summer
1 week ago
Staying connected: 25 easy ways to bond with older kids, tweens and teens
1 week ago
Children are spending more time on screens than ever but are they picking up this addiction from us?
Next Page