The symptoms can be vague and subtle.

But when it comes to sepsis, things can get serious – life-threatening even – very quickly, and so knowing what to look for, is vital.

Which is why this Facebook post by UK mum Alexandra Ruddy recently went viral, as she managed to save her eight-year-old son's life after spotting a red mark on his wrist and realising it to be the early signs of sepsis.

After having taking him to an after-hours doctor service to get him urgently seen to, the doctor on duty quickly diagnosed the sepsis, and the boy was able to get the medical help he needed.

"I’ve been in two minds whether to post this but my husband convinced me as he said if I hadn’t been here he wouldn’t have realised. I am sure there are other parents who wouldn’t either and the only reason I knew is because it had happened to a friend’s son 2 years ago and she had shared.

A week or so ago the littlest fell over at the zoo. He took quite a bashing but once we got home I cleaned him up. I rang school on Farm school day to make sure he washed his hands after digging and I tried hard to ensure it was kept clean (hand and elbow). He’s an 8 yr old boy however.

The wounds didn’t look infected- they’d got bigger so I was concerned but they weren’t gunky etc. Yesterday on our way to the beach he showed me his hand. I wasn’t happy as I noticed red tracking down his vein. I then checked his elbow - the same. I took him down to the out of hours feeling a bit silly but when the doctor saw it he commended me on recognising it and getting down ASAP.

This is blood poisoning/ sepsis. It isn’t something you can “leave” until Monday when the doctors are back in the office.

END_OF_DOCUMENT_TOKEN_TO_BE_REPLACED

Thankfully the antibiotics are working and he is well in himself! If you spot this red line running from a wound along the vein get yourself/ your child seen straight away. Hopefully my post might help someone the way my friend’s post from 2 years ago helped me ?" 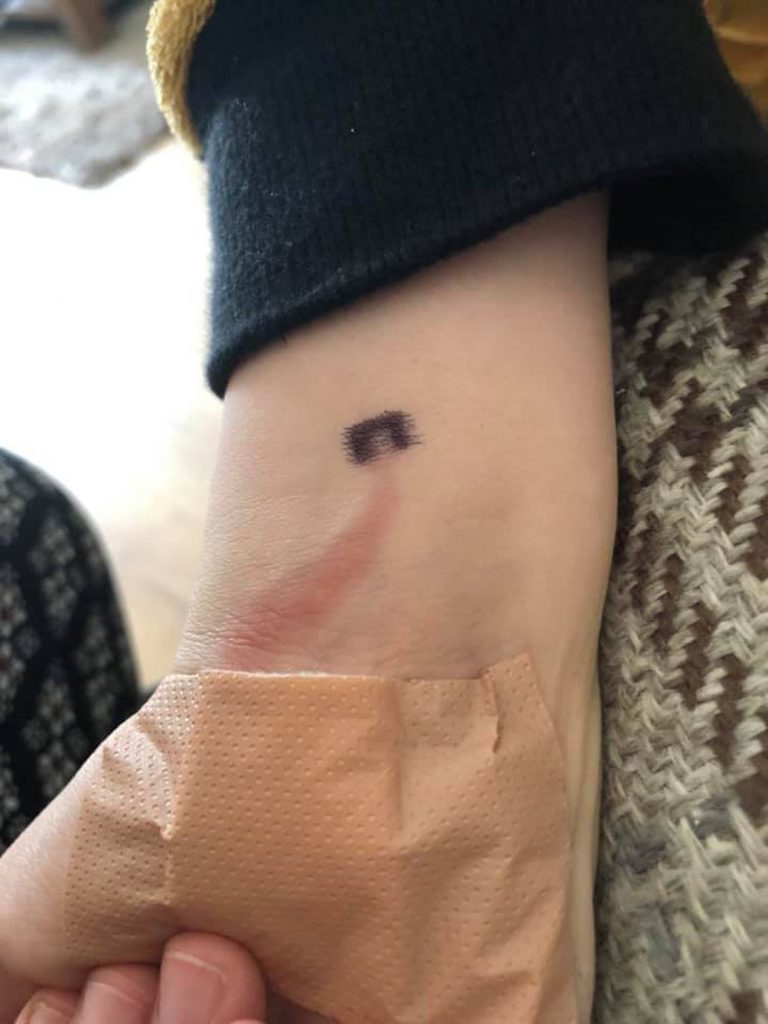 The photo Alexandra shared of the red line that she suspected was sepsis. Photo Credit: Alexandra Ruddy Facebook

Speaking to Channel Mum about the incident, she said:

“My friends told me to make people aware as the wounds weren’t very gunky. A couple of them wanted me to share it and it just snowballed from there. It’s an example of social media being used for good. Ewan was at school on Monday and then took part in a triathlon the following week.”


popular
Eamon Ryan's mother dies suddenly in tragic accident
Who is Andrew Tate and why are parents so worried about him?
Lottie Tomlinson and Lewis Burton welcome their first child together
Olivia Wilde accuses ex Jason Sudeikis of 'threatening' her
Olivia Newton-John's daughter shares heartbreaking video filmed before her mum's death
Archie Battersbee's mother issues warning about TikTok challenges
Here's where you can get the best deals on all your Back to School essentials
You may also like
1 day ago
How soon is too soon to leave your new baby for the first time?
6 days ago
If you could have a "parenting do-over", what would you change?
1 week ago
These are things police officers wish you’d teach your kids to keep them safe
1 week ago
I tried a viral 5-second trick that promised to make me a happier, calmer parent
2 weeks ago
I kicked my daughter's friend out of her birthday party- was I wrong?
2 weeks ago
Mums are sleep deprived for six years after having a baby – and yet dads are not
Next Page