Earlier today, in a whole new parenting low, I promised my little boy Pokemon cards if he would just please be super-quiet for 10 minutes while I did a phone interview for work – in the kitchen, while he played (quietly) with Lego at the dining table.

Bribery and bargaining – two parenting tactics I pretty much swore I would never resort to – before I had kids, that is, and realised that sometimes, those two are the only things that are going to get you through a three-hour flight or a visit to Ikea with your sanity intact.

And I am not alone.

In fact, according to research carried out in the UK by children’s vitamins firm Wellkid on over 2000 mums and dads, some two-thirds feel that parenting is just 'a constant round of mediation.'

Even worse? The researchers found that parents spend almost three hours every week negotiating with their kids, and that the average parent also spends 24 minutes of every day doing ‘deals’ with their offspring in an attempt to secure a compromise or get them to behave or eat food.

The researchers discovered that around one in three parents negotiate by threatening to take away something, such as their favourite toy, while 42 per cent threaten a TV or screen ban, while others said they remove the choice of sweets or dessert, confiscate their computer, games console and gadgets. Holding back a chunk of pocket money is also an option for many.

When it comes to which parent is the biggest pushover? Dads. Because as it turns out, mums are more likely to call the shots on a lot of things at home, such as how long children are allowed to watch TV and the amount of sweets they are allowed to consume. 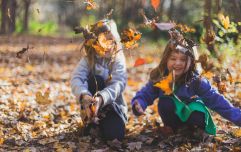 Opinion: Unstructured play is vital for kids, so we need to stop entertaining them

END_OF_DOCUMENT_TOKEN_TO_BE_REPLACED

Mums also call the shots when it comes to telling children how much food they should tuck into at mealtimes, what fruit and vegetables they eat and whether or not they are allowed to play computer games with older age ratings.

However, dads are the strictest parents when it comes to dealing with their children’s behaviour and discipline.

"While dads may be adopting a more laid-back approach to many aspects of parenting, they are still the ones keeping an eye on bad behaviour,” a spokesperson for Wellkid from Vitabiotics, said about the study results.

The study also found four in 10 parents say they and their partner often adopt a ‘good cop, bad cop’ approach to parenting.


popular
Parents with different surnames are being asked to carry their child's birth cert to travel but is it legal?
Young woman suffers "life-changing injuries" after being hit in face with firework in Galway
20 Unisex Irish Baby Names That Are Absolutely Magical
Can you pronouce these 7 'unique' baby names? They're trickier than you think
Blake Lively slams paparazzi for sharing 'disturbing' images of her daughters
Cute! 17 under-the-radar baby boy names you have never thought of before
Stuck For a Baby Name? Let These Online Generators Do The Work For You!
You may also like
6 days ago
Apparently, getting your kids up and ready for school is equivalent to an extra day's work
6 days ago
3 fun (and relatively mess-free) bath time tricks every parent should be armed with
1 week ago
The internet is praising this mum's life lesson for her ungrateful daughter
1 week ago
Expert claims parents should stop lifting baby's legs when changing their nappy
1 week ago
Musings: In a world where my children can be anything, I just want them to be kind
1 week ago
Kim Kardashian admits she's "guilty of a good bribe" when it comes to parenting
Next Page