The teacher offers the lessons for free.

A mum has gone viral after she sent a string of demanding text messages to a swim coach.

The teacher uploaded the exchange onto Reddit, where they explained that they had been offered money for the lessons in the past - although they continue to teach for free.

Not only did the mum demand exclusive lessons for her son, she wanted to the her to start charging other parents for the lessons - and give her the money as the teacher didn't need it.

It all began when the  woman got in touch to ask for lessons for her son, pushing for the teacher to answer (and not really giving her much time, in our opinions, to respond). 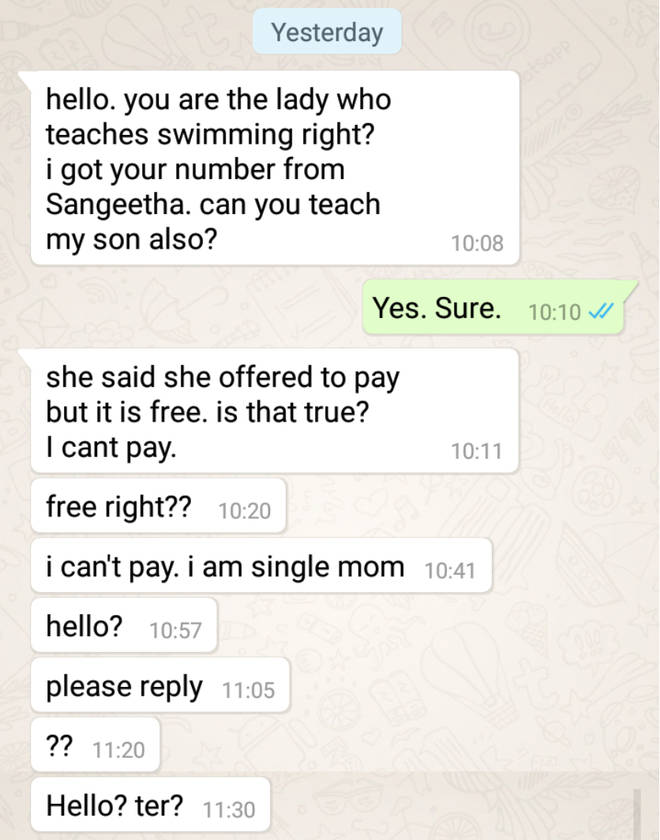 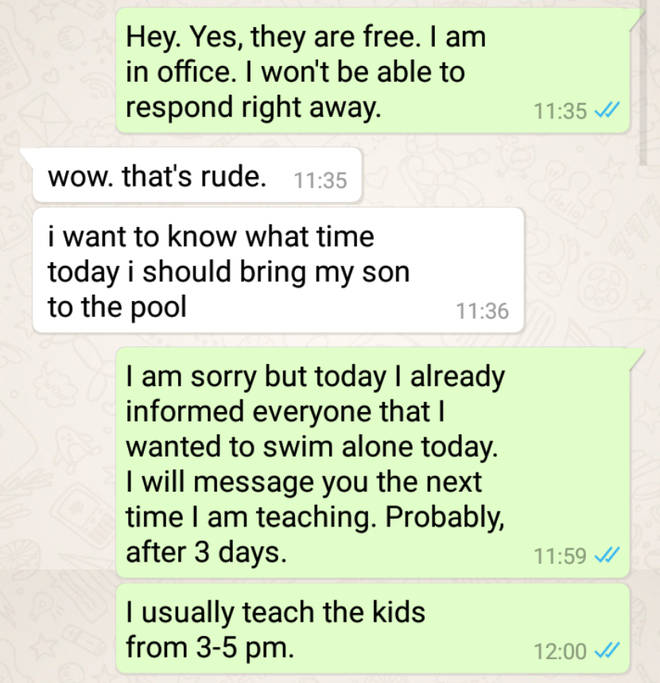 The teacher explained the she had already cancelled swim lessons for the day and wasn't up for teaching at the moment, anyways. However, that just led the woman to send her even more demanding messages.

She continued to not take no for an answer, demanding the the little boy be taught on his own due to anxiety issues. At on point, the mum threatened that she was going to throw her son in the pool and blame the coach "if something happens to him." 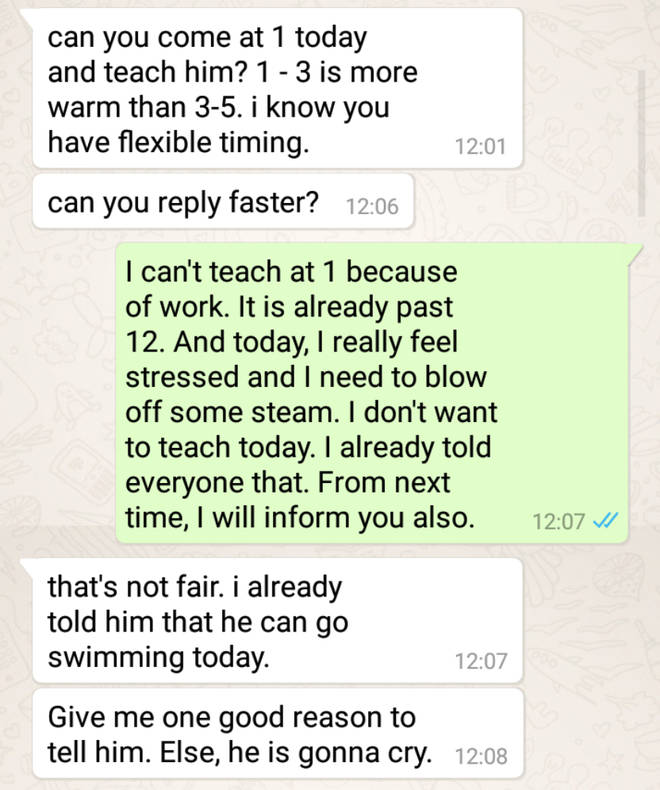 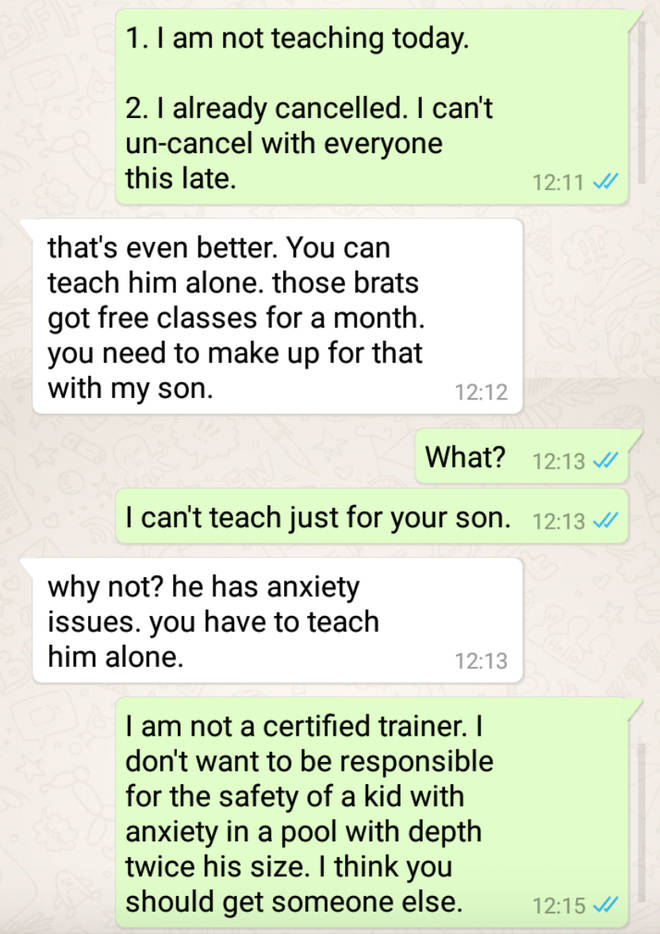 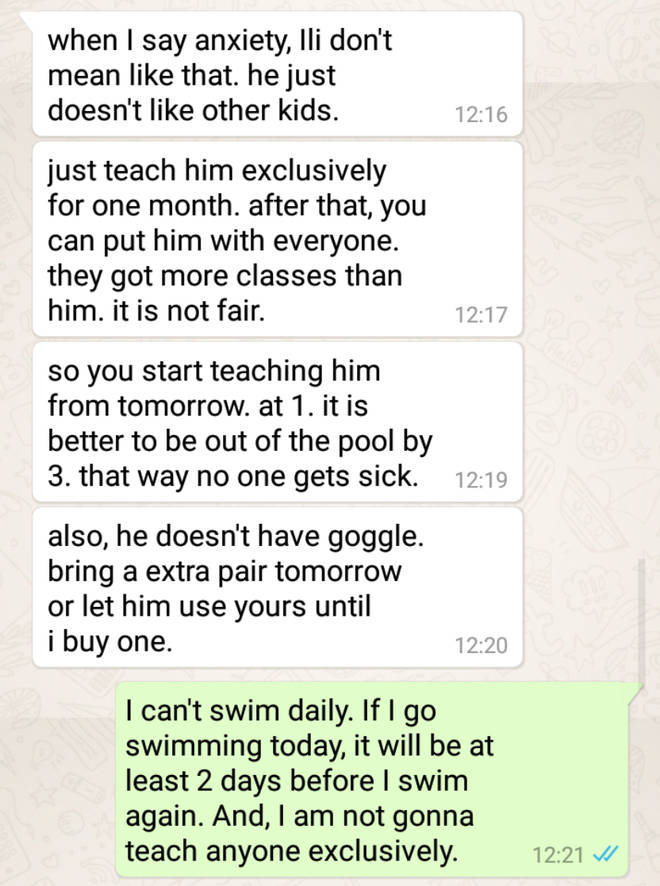 When the teacher, who repeatedly mentioned she was at work, failed to respond, the mum called her a "nasty, horrible person" - among many other terms.

People took to the comments underneath the Reddit post to slam the mum for her "rude" behaviour, with one asking, "what is wrong with people that they think this is acceptable?"

You can check out the full exchange here.


popular
11 little things that mean the absolute world to your kids
'There will be tears': Kate Garraway says husband could be in a coma for a year due to #Covid-19
10 reasons why everything is just so much easier with baby number two
Kids still got a pesky case of lice with school out? Here's how to fix it
Eight dogs believed to be worth €5,000 seized by Gardaí in Co. Tipperary
How to get your child to behave - without time-outs, shouting or bribery
These 5 Foods Could Increase Your Chances of Having Twins
You may also like
1 week ago
A dad who grew up without a father started a YouTube channel to teach 'basic dad skills'
2 weeks ago
After getting rid of most of her children's toys, one mum made an amazing discovery
3 weeks ago
Forget coffee – whipped strawberry milk the new viral drink trend your lockdown life needs
1 month ago
Fertility: Woman urges people to stop asking couples about their baby plans
1 month ago
Having a baby at 40 is a surefire way to stay young, says one famous mum
1 month ago
C-section birth: A video that actually explains the anatomy of a section in an understandable way
Next Page