Ricky Martin has shared the first photos of his five-month-old son Renn.

The singer and his husband, Jwan Yosef, welcomed their son in October last year with an adorable photo.

Taking to Instagram on Tuesday, Martin shared the first photos of Renn - and they are beyond adorable.

That translates to: "Here is my #ArabeBoricua Renn Martin-Yosef. The baby of the house. #BabyRenn #BabyBOY." 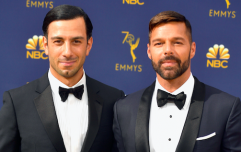 Ricky Martin and his husband, Jwan Yosef, welcome their first child together

END_OF_DOCUMENT_TOKEN_TO_BE_REPLACED

The couple are also parents to 11-year-old twins Matteo and Valentino, as well as 1-year-old Lucia.

In late September, the singer-and-actor confirmed that they were expecting their fourth child while he was attending the Human Rights Campaign National Dinner in Washington D.C.

“My family’s here,” he began, according to PEOPLE, before he praised his family.

He added that Lucia, who was not there on the evening, was the "light of my life."

“And by the way, I have to announce that we are pregnant. We are waiting,” he said, before adding that he loves "big families."


popular
Breastfeeding: The amazing tip one midwife gave me on how to clear a clogged milk duct
This amazing hanging egg chair is coming into Aldi next week and go, go go (but safely)!
These 5 Foods Could Increase Your Chances of Having Twins
Super simple trick to keep paddling pool clean when your kid isn't using it
The Best Kid-Friendly Swaps For Popular Swear Words
Totally tropical baby names inspired by Hawaii
4 ways to fix hard slime with ingredients you probably already have at home
You may also like
6 months ago
Ricky Martin and his husband Jwan Yosef have welcomed a baby boy
2 years ago
Congrats! Ricky Martin has confirmed he's married to Jwan Yosef
2 weeks ago
Some handy phrases to try when your child just will not listen to you
2 weeks ago
The 42 (thousand) minutes of bedtime battles that we struggle with every night
2 weeks ago
Grandparents may soon be able to hug their grandkids again Taoiseach says
2 weeks ago
10 surefire signs your a sports mam now (and you're loving it)
Next Page