Six things that might be waking your baby at night

How knackered are you on a scale of one to ten, with ten being losing the mug of coffee you just made and finding it in the fridge two hours later?

If your baby's frequent waking has turned you into a sleep-deprived, grunting mombie then check out our six things that might be waking your little one at night:

1. Staying awake during the day

You know the drill, at the time of night that us grown-ups are normally in our deepest sleep, baba decides that somewhere between one and four am is the best time to wake up and partaaaaayyyyy. Parental urban legend tells us that attempting to keep baby awake during the day will stop this from happening but - don't shoot the messenger - this is just not true. In fact, keeping baby awake during the day will actually only serve to make him or her more tired and, potentially, make the night-time waking even worse. Experts advise that when a baby is awake (and acting like they've had three red bulls in the middle of the night) lighting should be kept low and activity to a minimum. The good news is that this day-night sleep reversal usually sorts itself out by about six weeks of age.

2. They are not big fans of the cot

Okay, so I know that you just spent half the mortgage on a fabulous hand-carved solid oak cot that featured heavily on your pregnancy Pinterest board, but the fact is that about zero percent of newborns are happy to sleep in a cot. Sleep boffins say that the majority of babies aren’t sleeping in one until they are somewhere between two and six-months-old, and often even older. It makes sense if you think about how big and expansive a cot seems to a tiny baby - the direct opposite of where they came from!

This one might seem a bit obvious, but lots of parents are surprised when their four or five-month-old breastfed baba is still waking at night for feeds, especially if they've been told that their baby 'should' be sleeping through the night. Bear in mind that sleeping all night means going 12-13 hours without eating, since babies need a lot of sleep. 'Dream feeds' can really help a baby to start sleeping longer stretches at night. Because babies can only sleep for one long stretch per twenty-four hours, you should lift your baby, change their nappy, feed them, and then resettle.

Just like you when you were pregnant, your baba has no control over their bladder overnight, so they are gonna go during the night! A damp, heavy nappy is likely to make them uncomfortable. Likewise, leakage from an ill-fitting nappy can lead to wet and cold sheets, all of which bring the chances of night-waking up to about one hundred percent. Along with the risk of sore bums from nappy rash, nappies are not the ideal baby item to scrimp on. Try to choose a good quality nappy that will increase your baby's comfort at night and your chances of an extra bit of kip. 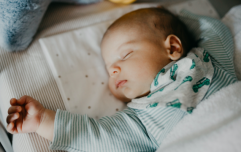 END_OF_DOCUMENT_TOKEN_TO_BE_REPLACED

If your little bundle of love gets cold at night, try to avoid using blankets, which an active baby will kick off. Instead, try a baby sleeping bag; they are a great way to keep your baby safe and snug at night while still allowing them to have full movement. Don't be tempted to overdress your little one. Experts say that babies only need one more layer of clothing than you would wear yourself at night.

Babies are learning and developing at an absolutely incredible rate - there is always something new going on, even when it doesn't seem like it. When your little person is learning how to roll, crawl, pull themselves up, walk, and talk, there will probably be a knock-on effect on their sleep pattern. Hardly surprising, as it happens to adults too when they are stressed-out or having a busy time at work.


popular
Trying for a baby? 11 sneaky signs you might have already conceived
A true classic! 10 timeless baby names that will never go out of style
Prince Harry praises Netflix's The Crown, says it's "loosely based on truth"
These 5 Foods Could Increase Your Chances of Having Twins
Johnny Sexton and his wife welcome baby - and they picked one of the most popular names
20 Unisex Irish Baby Names That Are Absolutely Magical
Meet the mumpreneur: Siobhán Stack of Hospitalbag.ie
You may also like
2 months ago
All is calm, all is bright: 3 easy ways to 'Christmas proof' your baby's sleep routine
4 months ago
Parents warned over baby sleeping bag safety issues – with only three passing safety tests
4 months ago
Essential sleep safety tips for babies that will help to give you peace of mind
5 months ago
The one trick my friend uses to get her baby to sleep – and swears it always works
5 months ago
You are going to wish you had known about this dad's crazy effective sleep hack sooner
5 months ago
Pick up, put down – there is a new, gentle sleep training method and parents are loving it
Next Page