The messages are uncalled for.

I think most kids are getting fed up being at home all the time and most are actually missing school at this point.

One thing I'm very grateful to have is a garden for my kids to play in and I encourage them to get as much as possible when the weather is good.

We've been pretty fortunate the last while because the sun has been shining so of course they've been out every chance they can get.

That's why I was very confused when I saw that Stacey Solomon was receiving nasty messages because she allowed her son outside in the sunshine.

🤍 Boss Baby 🤍 Rex in his sunglasses has been making us laugh so much these last couple of days so I thought I’d post these on here in the hope that they might make you smile in these scary times 🤍 Love you all 🤍 It’s been a crazy week but no matter what happened, never forget YOU.ARE.AMAZING. 👏🏼

The mother of three shared a photo of her youngest son Rex playing outside in her garden and to most people it was just a cute picture.

Unfortunately some people decided to send nasty messages to the Loose Woman presenter criticizing her for allowing her toddler out in the sun.

Stacey posted a video to her Instagram stories yesterday confused as to what she's supposed to do because whatever she does as a parent, she receives criticism. 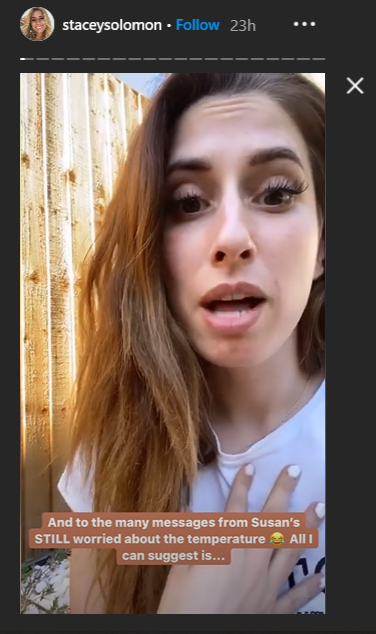 Solomon didn't seem to phased by the messages as she's unfortunately come up against this kind of mummy-shaming before and tried to laugh it all off in her Insta stories recording;

"To the many messages I've received from Susans still concerned about the temperature of my child.
Too hot in the sun, too cold in the tent. Seriously though, it must really keep you up at night."

I can totally understand Solomon's frustrations as it does seem like a mum that you can never get it right, especially when you have the whole internet judging your choices.

Honestly though, she's done a great job raising all three of her boys and I don't doubt she knows how to apply sunblock to a toddler so people really need to chill.

With everything going on in the world we shouldn't be judging a mum for letting her children play in their own garden.


popular
10 beautiful baby girl names from the 1900s that are making a comeback
Can you pronouce these 7 'unique' baby names? They're trickier than you think
10 one-syllable baby names that are perfectly short and sweet
Gorgeous summer-inspired baby names: 10 ideas for girls and 10 for boys
These 5 Foods Could Increase Your Chances of Having Twins
This Mum Is Facing Major Criticism Over Her Breastfeeding Choices
11 under-the-radar (but tres adorable) French baby names you need to know about