Growing pains are something that usually happen to children between the ages of seven and twelve as their bodies change from young children to preteens. I didn't grow much in height and even I experienced them in primary school.

Recently Stacey Solomon wrote about how she was having sleepless nights because her son Leighton was suffering from growing pains.

The mother of three posted to her social media asking other parents what their top tips where for soothing them.

The Loose Women TV personality said that her son has been going through the wars with growing pains and has been sleeping in her bed at night for comfort.

She spoke about how between trying to help Leighton and night feeds for Rex that she was absolutely exhausted and could do with some advice from other parents.

Stacey later posted her thanks to all the parents who had sent her ideas on how to reduce the pain of growing pains and even compiled them together so that she could share these tips.

Among the tips for soothing growing pains were; 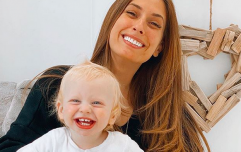 END_OF_DOCUMENT_TOKEN_TO_BE_REPLACED

My son currently falls right into the age category when children start to experience growing pains so this is definitely a list that I will be referring back to in the future, possibly even the near future.

Growing pains are described as an ache or throb in the legs, often in the front of the thighs, the calves or behind the knees. Growing pains tend to affect both legs and occur at night, and may even wake a child from sleep.

These pains should not be more than a slight throb and if they are causing your child severe pain you should speak to your healthcare professional.