Before I even became a parent I was already aware of the 'Peppa Effect'.

I remember babysitting my younger cousin, who is a born and raised Northside Dublin kid with two Irish parents, and being absolutely baffled as to why she had a posh British accent. It wasn't until she made me turn on her favourite show that I realised where it was coming from.

Now, with two children of my own, I'm even more aware of the appropriately named #PeppaEffect and so is the rest of the internet.

Has your kid suddenly developed a British accent like this cute girl from the Charlotte-area?

Well, it might be due to the "Peppa-pig syndrome" ?? https://t.co/X2UCz6WSVo (Video: Brandi Nichole Hall) pic.twitter.com/Fba7pwiFvu

Parents from all corners of the world have been tweeting about their children developing British accents and British pronunciation because of Peppa Pig.

When I was growing up my parents were always giving out to me for speaking in an American accent thanks to my afterschool dosage of Saved By The Bell and Sister Sister. Now it seems that parents on the other side of the Atlantic are now experiencing the accent exchange vice versa.

While some are baffled and confused by why their kids are walking around sounding like they're about to go for tea with the Queen, others are loving it and even actively encouraging it.

So my #son has been on #sesamestreet kick but I kinda wanna switch to #PeppaPig for the #PeppaEffect it’d be so cute watching him toddle around speaking in a #britishaccent !!!! #Shameless #momandson #brits

Is it weird that I low key want to play Peppa non stop for my future children so they have British accents?? #PeppaEffect 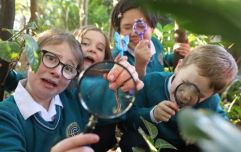 END_OF_DOCUMENT_TOKEN_TO_BE_REPLACED

Not all parents are so enthused though, in fact, many would like a word with Ms Pig about her influence on their children. She is a cartoon of course so that's never going to happen, but still, a parent can dream.

Personally, I like my children having their own accents. Our accents are a large part of our identities and where we come from and I love hearing different accents from around the world. Plus if my kids ever want to do a J1 in America when they're older an Irish accent in somewhere like Boston will get you far.

I saw one woman on Twitter talking about needing to 'deprogram' her child by playing 2Pac so maybe some Phil Lynott or Imelda May would work on mine.

My daughter comes up talking in this British accent like she brand new. Now I got to put on some 2pac to deprogram her. #PeppaEffect

Now I can't place all the blame at Peppa's feet because part of it is down to my children's dad. My son has always called me mummy because that's what his dad says. He once tried to slag me off because I say mam when referring to my mother and I put him back in his box real quick.

There's nothing wrong with anyone saying mum or mom but let's face it Ireland is majority a mam/mammy/ma country and always has been. Let's not forget that Eoin McLove sang 'My Lovely Mayo Mammy' not My Lovely Mayo Mummy.

While the Peppa Effect has taken a hold of Irish children, I think it's much more noticeable in the States because I've seen parents talk about how their kids are now calling vacations 'their holidays' and sure we already say that.

popular
Redhead girl stabbed with scissors at school 'because of colour of her hair'
Dani Dyer shares dad Danny's reaction to news she's having twins
Love Actually star reveals incredibly emotional behind-the-scenes story
Woman shocked after spotting her dead husband in promo video for restaurant
HSE issues advice for parents if their child starts choking
Bray could be getting its own Penneys by early 2024
Expert says Cocomelon acts "as a drug" to kids' brains
You may also like
1 week ago
Patient in his 80s killed in Cork hospital ward following attack
1 week ago
Murderer Daniel Murtagh scarred for life following Midlands Prison attack
3 weeks ago
Ireland set to ban "cruel process" of conversion therapy
4 weeks ago
Leo Varadkar to tackle the housing crisis with "Covid-style" plan
1 month ago
These are the counties that are most likely to get a white Christmas
1 month ago
It could snow in Ireland this week, according to Met Éireann
Next Page