My childhood was a haze of Elnett and slip jigs.

I hornpiped away my evenings and instead of drinking in fields like any respectable teenager, I binged on red lemonade and anticipation at the weekend Feis in Mullingar.

That was the life of a competitive Irish dancer in the 80's and 90's.

No Irish dancing career would be complete without a pushy 'Mam Rince' who could set a head full of rollers in under five minutes while lacing pommes.

So, what I want to know is: if you are good at something before it was cool, is that not even cooler?

Here's how you know you were raised on treble reels and hairspray:

1. You sometimes wore poodle socks to school. If you need to ask what poodle socks are perhaps you shouldn't read on.

2. At every family get-together, you would be dragged up to exuberant cries of 'show us a jig'. So you would do the hornpipe. Fools never knew.

3. Eventually, using your arms to dance was a revelation. 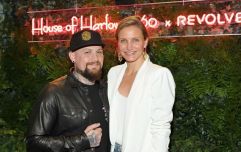 END_OF_DOCUMENT_TOKEN_TO_BE_REPLACED

4. You spent every St Patricks day in a pub since you were basically born except for the year you danced in the actual parade and your mam cried with happiness. Good times.

5. Céili's were your first taste of dating - the old-fashioned Tinder of our time and swiping was never permitted during the Siege of Ennis at the Hall - a place more sacred than mass. Well, almost.

6. PE classes at school consisted of The Waltz of Limerick in your plimsolls as you tried to avoid the girls with warts.

7. The Three Sea Captains were not three actual sea captains.

8. You were wearing capes long before anyone else thought they were fashionable.

9. You could only count as far as eight on a loop and then shout HOP!

10. You always had one gammy arm that wouldn't stay straight (you convince yourself that this is why you didn't make it into the Riverdance cast)

11. Your non-dancing friends were always asking you to demonstrate your 'chops' or 'clicks'.

12. Time moved at a slower pace back then  - like when you were waiting for recalls or for your costume fitting.

My Irish dancing days were before the wigs and the fake tan and the beauty pageant-esque glitter costumes that we see now.

I spent my childhood banging away in my hard shoes and trying to avoid doing Riverdance at every freaking school talent show in spite of my Dance Mom. But I did love it. And I still hate when people impersonate Irish dancing in movies or on TV - but that's mostly because their feet are turned in.

Were you an Irish dancer? Do you have one in your home now? Let us know in the Facebook comments.


popular
Cameron Diaz opens up about life with baby Raddix – and says motherhood changed her life
DIY: Here's how to transform your old trampoline into a super-cosy 'summer hideout'
Vogue Williams and Spencer Matthews reveal their baby girl's name – and we love it
Answer our short survey for a chance to WIN a stay for two at the Dingle Skellig Hotel in Kerry
Babies under six months should not have any water at all – one single sip could be harmful
Back to school: Here is why you should actually rethink those plastic lunchboxes
Stop peeing on the floor! The trick every boy mum needs to know about
You may also like
2 days ago
8 effective ways to help settle a toddler tantrum
2 days ago
How to get your child to behave - without time-outs, shouting or bribery
3 days ago
Do you make this common mistake when it comes to you and your baby's sleep?
4 days ago
Decoding toddlers: Here is why your child can't just 'calm down' during a tantrum
6 days ago
Yikes! Kristen Bell's daughter just asked her the funniest question about sex
1 week ago
Study finds women and parents with children under the age of 5 were hardest hit by the lockdown
Next Page