Do you wake up every day under a mountain of toys?

Do you find yourself wading through teddies and stuffed animals on your way in the door, slipping on miniature tractors on the stairs and standing on some Lego in the living room?

Ouch, there's no pain like it and we have screamed more than once.

Kids are great, but the sheer amount of stuff they amass would boggle the mind.

Repeated clear-outs don't seem to yield results and are usually met with staunch resistance so we're forever on the look-out for tidying hacks and the latest one doing the rounds is pretty good.

A post shared by Servidio Education Solutions (@servidio_education_solutions) on Dec 29, 2018 at 9:15am PST 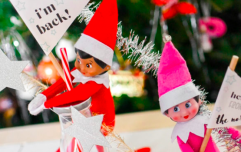 END_OF_DOCUMENT_TOKEN_TO_BE_REPLACED

The image, which has been liked thousands of times since it was posted last year pretty much says it all.

Simply put away any loose toys you come across in jail - i.e. a plastic storage box that can be locked.

You can hold on to them until your little ones do some chores for you.

The benefits are twofold. If you're blue in the face from telling your kids to put their stuff away, they now have a reason to do as you say.

It'll also get them to help out around the house, which certainly isn't to be sniffed at and although it might seem a little harsh to begin with, it's almost guaranteed to work.

Go on, give it a go and let us know you get on.

What are your tried and tested home cleaning hacks? Get in touch and tell us all on the Her Family Facebook and/or Twitter...

popular
Brian Dowling: "Aoife never thought the baby was hers"
Lauren Graham shares who she thinks Rory's baby daddy is
These 40 baby names are set to trend in 2023
This CoComelon toy is set to sell out before Christmas
7 Christmas markets and Santa experiences to visit with kids this winter
Elf on the Shelf is actually pretty bad for your kids, according to an expert
Expert says Cocomelon acts "as a drug" to kids' brains
You may also like
4 months ago
Why you shouldn't put your address on your luggage when going on a family holiday
10 months ago
New year, new skills: 5 ways to create the PERFECT poached egg
11 months ago
Japanese hack shows how to wrap Christmas presents without any tape
1 year ago
Mum shares great hack for making play dough in your slow cooker
1 year ago
Parents are loving this training toy that easily teaches kids to tie their shoes in minutes
1 year ago
Nope! The Dangerous Parenting Hacks You Should NOT Copy from TikTok
Next Page