Thinking about starting a family?

Then you might be interested to know that Save the Children has just revealed the best places to have a childhood as part of the ‘End of Childhood’ index the charity has compiled.

The report was conducted to highlight the ‘700 million’ children worldwide who Save The Children say have had their childhood ended too soon.

Ireland didn't do too badly at all, coming in 7th out of 173 countries, beating both the UK (at 22nd place) and the US (ranked at 36th place) based on facts that there are no moderate or severe risks to children overall when it comes to factors like mortality rates, out-of-school rates and child homicide rates, as well as things like early marriage, adolescent births and displacement by conflict.

So out of the 37 countries worldwide that has ‘few children at risk of missing out on childhood’ Ireland was firmly on the list.

However; there were two countries the 'End of Childhood’ index determined to be the absolute best places to raise children in the world: Norway and Slovenia. 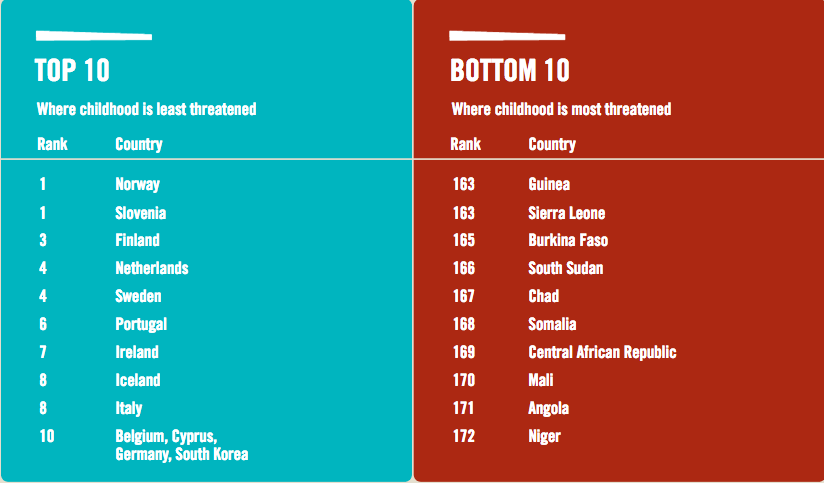 END_OF_DOCUMENT_TOKEN_TO_BE_REPLACED

The report highlights how as many as 263 million children worldwide are currently out of school, while 168 million are involved in some form of child labour.

Teenage pregnancies and childbirth is also listed as a major cause of having childhood end far too soon for many, many children worldwide, with the report stating how giving birth as teenagers is “forcing them to assume adult responsibilities and putting their health, education and economic prospects at risk.”


popular
Jacques O'Neill speaks out about Paige and Adam's relationship
Gardaí are appealing for assistance in tracing 17 year old missing since July
Planning your next getaway? Here are 6 fun family activities to try this summer
Barry Keoghan announces the name of his baby boy
Musings: I think 'Lawnmower' parenting is damaging for children
4-year-old girl killed in house explosion in London, police confirm
Child killed in house explosion in London
You may also like
9 hours ago
650 children strip-searched by Met Police in 2 years, report reveals
22 hours ago
Actor Anne Heche rushed to hospital after car crash
22 hours ago
Investigation into the discovery of a body of a male, Drumcondra, Dublin
1 day ago
Gardaí appealing for witnesses following fatal traffic collision in Skibereen Cork
4 days ago
Gardaí in Dublin investigating allegations of the Sexual Exploitation of Children
4 days ago
Parenting influencer accused of exploiting her toddler and attracting predators
Next Page