"We've got three coming at once. So [this is] probably going to be my last."

TikTok user 'TheBlondeBunny1' has shared a detailed video about superfetation, a rare occurrence where a women ovulates twice in one month and can therefore become pregnant while already pregnant.

The phenomenon, which has long been debated across the medial community, has been recorded multiple times across the US. Approximately 10% of women are thought to ovulate twice a month, and less than 1% have reported superfetation.

"Your body is supposed to switch up your hormones and stop you from ovulating again once you're already pregnant," said the mother-to-be on TikTok. "In my circumstance it did not."

The TikTok user said her twins and third baby were conceived a few weeks apart, but that some superfetation cases can be so far apart that they result in different due dates.

"With superfetation the eggs came at different dates, and so they have different gestational ages," she went on. "Ours are only a few weeks apart but sometimes they can be months apart, and those people actually have to have different due dates.

She goes on to say that she and her partner knew they had conceived another baby due to the age differences between the foetuses. 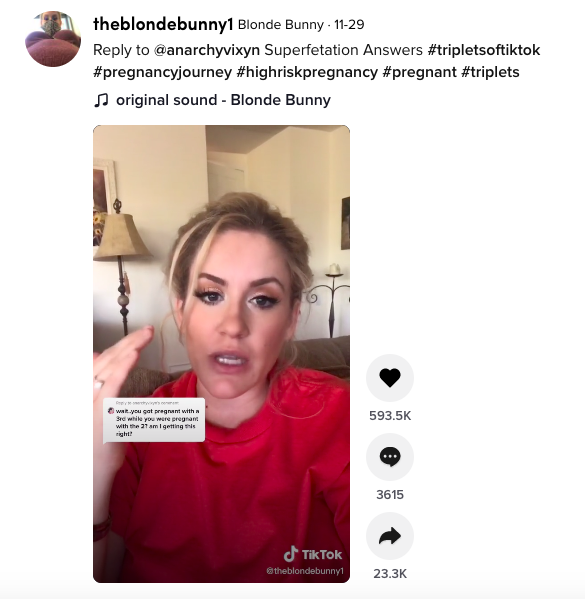 "The first two babies are ten and 11 days older than our third baby, so that's how we knew straight away it was a second pregnancy," she said. "The doctors are doing ultrasounds every two weeks.

"[The third baby] has been hitting every single milestone, [and] growing at a healthy rate, just ten to 11 days behind the first two babies we have."

She went on to say that despite being delighted by her third pregnancy, she probably won't be having any more any time soon.

"We hit the jackpot, it's our first pregnancy," she said. "We've got three coming at once. So [this is] probably going to be my last."


popular
Baby twins die in hot car after dad forgets to drop them to creche
How to keep your fake tan on for longer during the heatwave
Five teenage girls rushed to hospital after crash in Kilkenny
Opinion: All schools should have generic school uniforms
London with kids? 5 great places to cool down on a hot summer day
Irish people could be treated to spectacular sights in the sky over the next few nights
You can now choose who can and can't see you're online on WhatsApp
You may also like
4 days ago
Concerning number of people in Ireland are surrendering their dogs
5 days ago
650 children strip-searched by Met Police in 2 years, report reveals
6 days ago
Actor Anne Heche rushed to hospital after car crash
6 days ago
Investigation into the discovery of a body of a male, Drumcondra, Dublin
6 days ago
Gardaí appealing for witnesses following fatal traffic collision in Skibereen Cork
1 week ago
Gardaí in Dublin investigating allegations of the Sexual Exploitation of Children
Next Page