Anna Kournikova and Enrique Iglesias have 'welcomed their third child'

Anna Kournikova and Enrique Iglesias have reportedly welcomed their third child together.

The couple welcomed twins Lucy and Nicholas two years ago. And Enrique's brother Julio Iglesias Jr.has said that they have become parents for the third time.

"I’ve already become an uncle," he told an interviewer on Chilean radio station ADN [via The Daily Mail], as he was asked about the rumours he was going to become an uncle again.

The interviewer looked to clarify that he wasn't speaking about the couple's eldest children, asking if the baby had already been born - to which the singer replied, "yes."

And while he said it was a "secret" whether the newborn was a boy or a girl, he told the interviewer that his brother is "very happy" to be a dad-of-three now.

The couple kept Anna's pregnancy under wraps, but recent photos obtained by Hola! Spain show them on a yacht in Miami, with Kournikova dressed down with a blue hoodie covering what appears to be a baby bump. 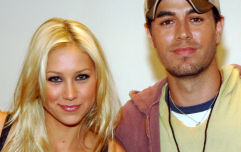 Anna Kournikova and Enrique Iglesias 'are expecting their third child together'

END_OF_DOCUMENT_TOKEN_TO_BE_REPLACED

Neither Kournikova or Iglesias have commented on the news. However, the couple also kept pretty tight-lipped during the 38-year-old's first pregnancy - only confirming the twins' arrival days after they were born.

The Hero hitmaker previously spoke about how he hopes to be a "cool dad" to his twins, Nicholas and Lucy.

"It's one of the best feelings in the world. [I'm more responsible]. I drive slower. I think about stupid things a few more times before doing them," he said during an appearance on ITV's Lorraine in 2018 [via MSN].

The proud parents have been dating since 2001 after they met on the set of Iglesias' music video for Escape.


popular
Stacey Solomon defends choice to let son play outside after receiving nasty messages
You only need five ingredients for this delicious Maltesers and Baileys fudge
#Covid-19: "I was shamed for being there and my child left crying' – a single mum on food shopping during lockdown
#Covid-19: Pharmacist shares how to tell the difference between hay fever and coronavirus symptoms
The largest family in Britain have just welcomed baby number 22
Mini Bella Boutique is running a huge online clearance sale as it sadly closes
Do babies in Ireland still get the BCG vaccine to protect against tuberculosis?
You may also like
1 month ago
Enrique Iglesias reveals newborn daughter's name - and her adorable nickname
1 month ago
'My sunshine': Anna Kournikova and Enrique Iglesias share first photo of newborn daughter
1 year ago
Anna Kournikova posts first photo of her baby bump four months after welcoming twins
2 years ago
Enrique Iglesias shares rare glimpse of baby daughter in sweet video
2 years ago
Enrique Iglesias posts first photo with one of his newborn twins
2 years ago
Congrats! Major news tonight for Anna Kournikova and Enrique Iglesias
Next Page