Concerns about increase in babies being born with drug-withdrawal symptoms

Nearly 937 cases have been reported in Ireland.

There are concerns about the number of babies born with drug withdrawal symptoms.

A new report has found that there has been an increase in the number of Irish babies being born with the disorder.

According to Newstalk, almost 100 babies were born with drug-withdrawal symptoms between 2011 and 2020.

In 2020 alone, the number of babies born with this disorder was 85.

The HSE has reported a total of 937 cases.

This disorder is caused when the baby's mother actively takes addictive drugs throughout her pregnancy.

Speaking to Newstalk, Dr. Mary McCaffrey said taking drugs during pregnancy can cause health issues for babies, in the early days, as well as in the future.

She explained, "If the baby has been getting drugs across the placenta for the whole of the pregnancy and then suddenly, when the pregnancy is over, the umbilical cord is cut, in time the baby will get the same withdrawal symptoms." 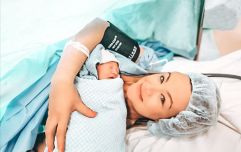 The most natural thing in the world? You've got to be f***ing kidding me

END_OF_DOCUMENT_TOKEN_TO_BE_REPLACED

Babies born with this disorder are often born shaking. They can also be very jittery and fidgety.

They will also struggle to feed because of the withdrawal symptoms they're experiencing.

Other symptoms include high-pitched crying, sleep issues, as well as sweating.

In very extreme cases of this disorder, many babies may have seizures.

The first symptoms will appear within the first week.


popular
Multiple people killed in Denmark shopping mall shooting
I tried 'slow parenting' for a year and I'm never going back
Opinion: The obsession with routines and sleep training for babies is weird – and stressful
Supermarkets add security tags to baby formula as cost of living crisis deepens
The 'Ice Cream' is being called a 'must-try' sex position - but there's one flaw
Musings: Now that it's summer, mums please get into the photos
Expert says Cocomelon acts "as a drug" to kids' brains
You may also like
6 days ago
Expecting mum says she debating with husband about when to shop for their baby
1 week ago
"Over the moon": Mollie King announces pregnancy
1 week ago
Question: How do you move on from gender disappointment?
1 week ago
Alexandra Burke reveals plans to return to work 10 weeks after birth
2 weeks ago
"I don't care": Mum-to-be responds to vaping backlash
2 weeks ago
Due in July? Science says babies born this month have three amazing advantages
Next Page