Model Emily Ratajkowski revealed yesterday how she is pregnant with her and husband Sebastian Bear-McClard’s first child together.

The 29-year-old announced her happy baby news by showing off her growing bump in Vogue – in the most beautiful photoshoot, of course. but revealed she "won't know" the baby's gender until the little one turns 18.

Grateful & growing ? Thank you @voguemagazine for this very special cover.

However, if you are thinking you can't wait for the gender reveal pictures, you'll be waiting.

The supermodel told the magazine that she is going to raise her child non-binary and once he or she reach 18, the idea is that the child will be able to reveal her own gender. 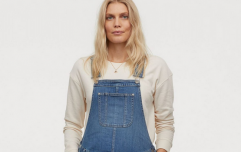 END_OF_DOCUMENT_TOKEN_TO_BE_REPLACED

“When my husband and I tell friends that I’m pregnant, their first question after ‘Congratulations’ is almost always ‘Do you know what you want?’

“We like to respond that we won’t know the gender until our child is 18 and that they’ll let us know then,” Ratajkowski wrote.

She continued: “Everyone laughs at this. There is a truth to our line, though, one that hints at possibilities that are much more complex than whatever genitalia our child might be born with.

“The truth that we ultimately have no idea who—rather than what—is growing inside my belly. Who will this person be? What kind of person will we become parents to? How will they change our lives and who we are?"


popular
Anna Daly launches her cosy chic lifestyle brand, Little Bliss
Graham Norton launches new fizzy rosé just in time for festive season
Adam King is going to be on the Late Late Show tomorrow night
These 5 Foods Could Increase Your Chances of Having Twins
The Best Homemade Mincemeat Recipe (You'll Never Buy Supermarket Mince Pies Again)
The beautiful poem that sums up how all brand new mums are feeling right now
Here's everything we know about the Call the Midwife Christmas special
You may also like
3 weeks ago
Irish dentist shares top five tips on oral care during pregnancy
3 weeks ago
Dad-to-be slammed online for sharing snap of himself eating pizza in the delivery room
1 month ago
It's a fact! Valentine's Day is the cause for the baby boom in November
1 month ago
New research finds that poverty can treble the risk of stillbirth
1 month ago
November-born babies are super-special – especially for THIS unique reason
1 month ago
Deliveroo and Scoop has created ice cream inspired by pregnancy cravings – and we want it
Next Page