Here's what you need to know about Hyperemesis gravidarum

This morning, Kensington Palace announced that Kate Middleton was expecting her third child.

In the official statement, the palace said that the Duchess of Cambridge would not be attending an official engagement at the Hornsey Road Children's Centre in London, which had been planned for today.

The statement also said that the Duchess is suffering from the same condition that struck her with her previous two pregnancies, Hyperemesis gravidarum, a severe form of morning sickness.

Hyperemesis gravidarum often referred to as HG, is a condition that results in extreme vomiting and nausea which can last for the entire duration of one's pregnancy.

Although it can continue for nine months, HSE guidelines suggest that it sets in between 4-7 weeks gestation and the peak time for HG is around 11 weeks.

Although it sometimes improves in the middle of pregnancy, Hyperemesis Ireland says that it often lasts right up until birth which is why professional medical treatment is essential for women suffering from HG.

Treatment for HG varies and depends on the severity of the condition but it can include fluids that are delivered intravenously and/or anti-sickness tablets.

If  5 percent of the pre-pregnancy weight is lost, nutritional intervention is often required and this can result in hospital stays.

Those with the condition are given fluids and their condition is heavily monitored until they are deemed well enough to return home.

Speaking to The BBC previously, Dr Tim Draycott, consultant obstetrician and spokesman for the Royal College of Obstetricians and Gynaecologists, said:

"With treatment - intravenous fluids and medication to control the vomiting and nausea - it's quite a benign condition although horrible to have.

"The real risk is under-treatment". 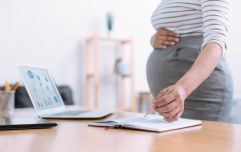 A third of bosses won't hire women in case they get pregnant, study shows

END_OF_DOCUMENT_TOKEN_TO_BE_REPLACED

He also said that although there is no exact definition for what causes the condition, it's linked to hormonal changes during pregnancy.

It can cause dehydration, and/or weight loss which is why women with the condition are urged to seek advice and help from their doctors.

Although nausea and vomiting are the most common symptoms, it can present in other ways including low blood pressure, headaches, fatigue, confusion and a decrease in urination.

Alternative treatments, depending on the severity of HG, include acupressure, homeopathic remedies and bed rest.

Hyperemesis Ireland is an organisation established to " support sufferers of nausea and vomiting in pregnancy and its severe form; Hyperemesis Gravidarum" and you can find out more here.


popular
Stacey Solomon defends choice to let son play outside after receiving nasty messages
#Covid-19: "I was shamed for being there and my child left crying' – a single mum on food shopping during lockdown
The largest family in Britain have just welcomed baby number 22
You only need five ingredients for this delicious Maltesers and Baileys fudge
#Covid-19: Pharmacist shares how to tell the difference between hay fever and coronavirus symptoms
Do babies in Ireland still get the BCG vaccine to protect against tuberculosis?
8 foods that can REALLY help your baby sleep better (we swear!)
You may also like
6 months ago
Aunties might be as important as mothers when it comes to raising women
10 months ago
Find jogging boring? Then you need to try the latest exercise trend... 'plogging'
10 months ago
This study says that women have way more stamina than men do
1 year ago
Hollister's latest swimwear campaign is important for their young shoppers
1 year ago
Ireland named among the best countries in the world for women to live
1 year ago
10 incredible quotes for incredible ladies on International Women's Day
Next Page