'I’ll let the baby do the talking': Hilaria Baldwin reveals that she is pregnant

Hilaria Baldwin has revealed that she is pregnant again - as she admitted she doesn't "have the words to express how this sound makes us feel".

The mum-of-four confirmed her and her husband Alec's news on Monday, as she posted a video of her stomach with the baby's heart beating.

“Sound up…I’ll let the baby do the talking because I don’t have the words to express how this sound makes us feel,” she wrote.

“Just got the great news that all is well and all is healthy with this little munchkin. I wanted to share this with you. Here we go again."

The couple's news comes as Hilaria revealed in November last year that she had experienced a miscarriage at four months.

They announced in September last year that they were expecting again, after experiencing pregnancy loss in April 2019. However, in November, Hilaria shared that she had miscarried. 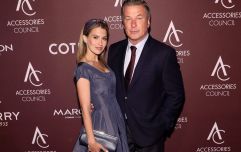 Alec and Hilaria Baldwin are expecting another child together

END_OF_DOCUMENT_TOKEN_TO_BE_REPLACED

"We are very sad to share that today we learned that our baby passed away at four months," she wrote at the time.

"We also want you to know that even though we are not ok right now, we will be. We are so lucky with our four healthy babies — and we will never lose sight of this."