Teen Mom's Kailyn Lowry has shared the sex of her fourth child.

The 27-year-old - who confirmed her pregnancy last week - told E! that she had  "never found out the sex of the baby before the birth" with any of her previous children.

However, she felt that there was something different about this pregnancy - so, she decided to find out this time.

She told the publication that she and Chris Lopez are expecting a baby boy in July.

"We are so excited, there's just something so special about a mother and her sons," she said.

The couple have a two-year-old son together, Lux. Kailyn is also mum to 9-year-old Isaac and 6-year-old Lincoln.

Kailyn confirmed her pregnancy in a statement shared on her Instagram account - which included a photo of her three kids. 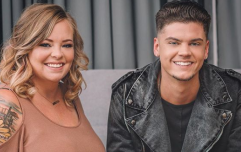 END_OF_DOCUMENT_TOKEN_TO_BE_REPLACED

"We’re confirming the news, baby #4 is coming soon! I’m almost 16 weeks pregnant & it’s been a rough few months this time around," she said.

“I've had nausea, morning sickness, and absolutely no energy. This week I’m starting to feel a bit better and I'm really hoping it stays this way!”

She partnered with the app Peanut for the announcement.

“Going through nausea and morning sickness while trying to keep the news a secret can be quite isolating. There are so many helpful threads on the app from other women who have been through it too. It's always reassuring to know you're not alone," she continued.

She encouraged her followers to join the app, whether they are "already a mom, pregnant, or trying to conceive."

"It's an amazing space to build friendships, find support and learn from other women at a similar stage in life. There's nothing like support from other women to get you through," she continued.


popular
Hospital bag essential - mum shares 'Pad-sicles' hack all expectant mums need
Are you the middle child? It could mean that you're the best friend to have
The must-have decor buy for your baby's nursery is back in stock – and it's only €28
"She's already changed our world" Gigi Hadid and Zayn Malik welcome baby girl
A Unicorn Cheesecake recipe perfect if you have a birthday coming up soon
Win a complete Eucerin anti-pigmentation bundle for you and your mum
These 5 Foods Could Increase Your Chances of Having Twins
You may also like
2 years ago
This is the outrageous amount of money the stars of Teen Mom make per episode
2 years ago
Teen mum takes her two year old daughter to prom with her
2 years ago
Teen Mom's Farrah Abraham has been arrested at the Beverly Hills Hotel
2 years ago
Teen Mom OG's Catelynn has sadly suffered from a miscarriage
2 years ago
Teen Mom's Catelynn Lowell reveals she's pregnant with her third child
2 years ago
Teen Mom's Amber Portwood confirms she is pregnant with baby number two
Next Page