80% of parents believe technology has made parenting more difficult

Most participating parents said their kids had received their first internet-connected device by the age of seven.

A recent survey has shown a large amount of parents believe technology has made parenting harder as it causes kids to grow up faster.

The survey, conducted in the US by OnePoll on behalf of Smith Micro Software, found that 80% of participating parents agree it's harder to raise children in the digital age than when they were growing up.

2,000 parents of school-aged children were polled in order to see if those raising children believe technology is impacting their parenting.

Of them, 86% also agreed that kids "grow up" much faster today as a result of the role technology plays in our everyday lives.

Many participating parents said their kids had received their first internet-connected device by seven years old.

23% admitted to giving their child access to the internet between the ages of three and five.

The survey also found that kids spend an average of 43% of free time on some sort of internet-connected device, which may have been increased by the pandemic. 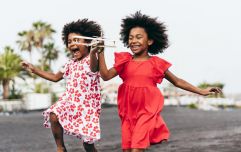 END_OF_DOCUMENT_TOKEN_TO_BE_REPLACED

When it comes to the dangers facing children on the internet, 88% of parents polled agreed it's their responsibility to monitor their child's online activity. However, 54% said they feel to monitor, track or control their child's digital activity was a violation of trust.

Just this week, Instagram announced it will be pausing its 'Instagram Kids' project amid safety and mental health concerns from parents and officials. The news comes amid criticism towards the platform, which, according to claims in a Wall Street Journal report, knew from its own research that it was "toxic for teen girls."

popular
Emma Pattison made distressed call to sister before murder-suicide
Vogue Williams opens up about her divorce from Brian McFadden
Dunnes Stores launches stunning collection of Communion dresses
Shows like Bluey and Peppa Pig are actually bad for kids, expert warns
Expert says Cocomelon acts "as a drug" to kids' brains
Emma Pattison: Tributes paid following death of head teacher and her family
Siblings kidnapped in March 2022 have been found alive
You may also like
5 days ago
Gary Glitter freed from prison after serving half of 16-year jail term
1 week ago
Bride asks for divorce day after wedding following groom's disrespectful cake stunt
1 week ago
Four year old girl killed in dog attack remembered as "a very happy child"
1 week ago
Identical twins trying to get pregnant at same time with shared fiance
1 week ago
Man claims to have found infant remains near Bessborough site in the 90s
2 weeks ago
Patient in his 80s killed in Cork hospital ward following attack
Next Page