As of yet (apart from school-related matters) I am a firm believer in enforcing a rule of as little screen time as possible with my own two children.

My iPad (which is from 2013) lives in a drawer and was last charged in 2019, when we were flying off somewhere and I charged it, brought it – only for it never to even be switched on for the entire trip. I have a phone, of course, but when we are at home in the afternoons, this lives on a shelf in the hallway, where I can hear it if it rings or a message pops in, but where it is out of sight and not tempting me to scroll through social media when life with my kids is happening right in front of me.

We have a TV, of course, and love nothing more than to cuddle up for movie nights on the weekends, or watch funny Youtube videos or cartoons on a Saturday or Sunday morning, but during the week, there is no TV in the morning, and only sporadically does it come on in the afternoons and evenings too.

I know that there will come a day when screens will play a bigger part in my children's lives (they are now 10 and six), but as of now, I limit it as much as possible, feeling like there are far more fun and important things we could be spending our time together on.

They use screens in school, and my 10-year-old now and again has projects where she needs to work on my laptop, and that is great – I embrace all the good things about technology – I am just a very firm believer in that children growing up today will have so much exposure to technology and gadgets anyway, they are more in need of someone who will limit this for them than someone who will encourage them to get obsessed with from an early age. 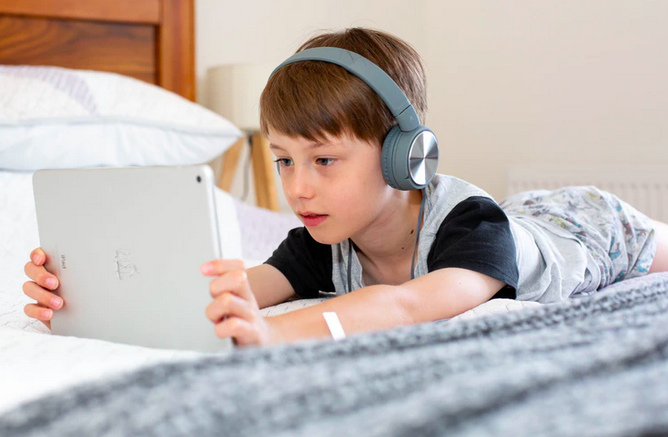 And I am not taking my concerns in regards to technology from thin air, there have been plenty of studies to back up how our collective addiction to screens is harming our health, sleep, eating habits, relationships and cognitive development – to name a few.

In a brand new study released by the French Public Health authority, researchers warn that allowing children to watch screens in the morning has lead to “a huge increase in language, behavioural, cognitive and social difficulties.”

The study, by the University of Rennes, looked children aged between three and six and found that the risk of speech and learning difficulties was three times higher for children who were watching screens in the morning rather than engaging in conversations with their parents and/or siblings. And this risk jumped to an alarming six times higher if children watched screens, and then did not talk to their parents about what it was they had watched.

The children were also more likely to become agitated from watching televisions, tablets or mobiles in the morning, and tended to remain disturbed for the rest of the day. Even more worryingly, passive screen watching can also make children more prone to hitting or scratching other children at school.

Speaking to The Telegraph about the study, child psychiatrist Lise Barthélemy, said: “Screens in the morning make them over-excited for the entire day. I deal a lot with agitated children showing disturbed behaviour.”

Dr Bathélemy explained exposure to screens as soon as children get up leads to “a huge increase in language, behavioural, cognitive and social difficulties”.

While Michel Desmurget, a neuroscientist who helped conduct the study, described passive screen watching by young children as “a major public health problem”.

“We already know that exposure to screens, which is now reaching stratospheric levels, is conducive to language difficulties, but this study is the first to reveal the impact in the morning. Face-to-face interaction over breakfast is essential.”

French health service guidelines advise parents not to allow children under three to watch screens, in line with a World Health Organization recommendation that under-threes should not watch TV or sit playing games on a tablet.

Advertisement
popular
Babies born in February have some pretty cool advantages – no, really – it's true
We have St. Brigid to thank for our new bank holiday, but who exactly was she?
These 40 baby names are set to trend in 2023
11 of the best fun playgrounds in Dublin
Man sues friend for £1.9m after she refused to be his girlfriend
Little boy dies of cancer after doctors ignored mother's concerns six times
Liz Hurley addresses rumours she 'took Prince Harry's virginity'
You may also like
1 week ago
Overcrowding in Irish hospitals making it difficult to treat children
3 weeks ago
Doctors express concerns after rise in RSV cases in the Mid-West
4 weeks ago
Experts reveal how long you should wait to bathe your newborn after birth
2 months ago
Third child dies from scarlet fever in UK- here are the symptoms to look out for
2 months ago
Irish dad shares warning after his 12-week-old baby was hospitalised with RSV
2 months ago
Warning issued to Irish parents after increase in RSV cases
Next Page