If you have ever struggled to get your baby to finally nod off when you know they are tired, but just won't give in, you are going to be blown away by this American dad's seriously impressive technique.

Dallas-based Austin Miles Geter recently shared a clip on Facebook of him trying to soothe his newborn baby girl, Charlie, to sleep.

As he rocks little Charlie, while sitting in a chair, holding her gently under the chin, he explains that he has seen something recently that he wants to try.

"So here we are, she keeps crying because I keep having to change positions but I know she’s sleepy," Geter explains in the now viral clip. "But I heard if you gently rub their eyebrows they go to sleep. So I’m going to try it."

He starts to gently stroke his daughter's eyebrows and literally, within seconds, the tot's eyelids start to droop.

And less than a minute later, the child is completely asleep.

The clever dad pumps his fists in a silent victory, because he clearly knows better than to make a noise and ruin the miracle. 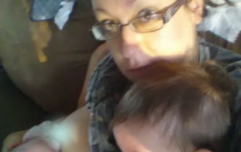 END_OF_DOCUMENT_TOKEN_TO_BE_REPLACED

Needless to say, the clip was quickly shared by thousands, and has racked up millions of views already.

Many parents were eager to comment on the video, either to reveal they had used the same trick, or to announce they wish they had known about this when their babies were younger.

Brilliant! Wish I knew that trick 17 years ago when my daughter was a beautiful little nugget," one person wrote.

"She is so cute, and I rubbed all 3 of my boys' eyebrows and it worked on them."

Tell us – have YOU tried something similar, parents? Does it work as effectively for you?


popular
No, you’re crying! An Irish mother reunited with her child as she returns from Navy ship
We're told to stay inside and we'll be safe but Jennifer Poole was killed in her own home
10 rare Irish baby names not too many parents are using these days
Mother wants to exhume daughters body from her grave in Cork
Here's what bookies think Harry and Meghan will name their baby girl
Maternity hospitals can now begin to ease visitor restrictions says HSE director
Katie Holmes shares rare photo of daughter Suri to mark her 15th birthday
You may also like
2 days ago
Crafty mum makes 'edible' sandpit for her baby by putting Cheerios in a blender
5 days ago
Conor McGregor just told his little boy to punch another child in the mouth
2 weeks ago
Mum shares image of shocking sugar content of just one Creme Egg and it's A LOT
3 weeks ago
The Easter-themed Colin the Caterpillar is leaving M&S shoppers confused
1 month ago
Chrissy Teigen just shut down mum shamers in the most Chrissy Teigen way ever
1 month ago
A TikTok hack shows how partners can help a pregnant mum when her back is hurting
Next Page